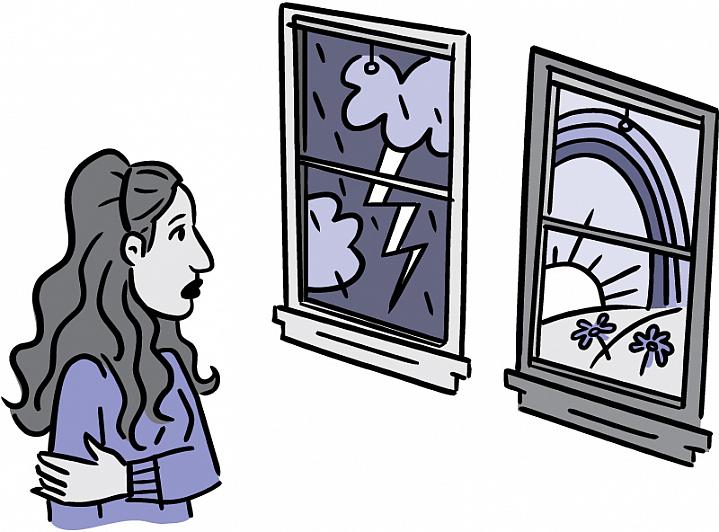 Most people feel happy and energized on some days and less so on others. But if these mood changes last for a week or more and are severe—making it hard for you to sleep, stay focused or go to work—it may be a sign of bipolar disorder. Not only can bipolar disorder damage relationships, affect your grades and make it hard to keep a job; it can also be dangerous.

People with bipolar disorder—also called manic-depressive illness—go through extreme changes in mood, energy and behavior. These “mood episodes” can continue for a week or 2, and sometimes longer, with symptoms lasting every day for most of the day.

Sometimes people with bipolar disorder become very sad and much less active. They have trouble concentrating, forget things and lose interest in fun activities. They may try to hurt or even kill themselves. This is called depression.

People with bipolar disorder also go through periods of feeling unusually happy. They become more energetic and active than usual. They become impulsive and take great risks. They might do things that make them lose their jobs, their spouse or all their money. This is called mania. “They don’t see the consequences of their behaviors,” explains Dr. Carlos A. Zarate of NIH’s National Institute of Mental Health (NIMH). “Or they do see it but they don’t care.”

Bipolar disorder is fairly common, but it’s difficult to tell exactly how widespread it is. “There are a variety of illnesses that are similar to bipolar disorder, but with less severe upswings,” says NIMH’s Dr. Francis J. McMahon. Researchers estimate that bipolar disorder affects nearly 6 million American adults in a given year.

Researchers are gaining new insights into what goes awry in the brains of people with bipolar disorder. For example, people with the disorder seem to have different ways of perceiving emotions in others’ faces.

Scientists have also been finding clues in genesStretches of DNA, a substance you inherit from your parents, that define characteristics such as how likely you are to get certain diseases.. “We’ve known for at least 50 years that the majority of bipolar disorder is caused by genes,” McMahon says, “but those genes have been remarkably difficult to pin down.”

McMahon and his colleagues have been comparing the genomesThe full set of all your genes. of people with and without bipolar disorder, searching for genetic variations—small genetic differences—that appear more often in people with the disorder.

If scientists could identify the genetic changes that lead to bipolar disorder, they might eventually be able to design a more accurate test or better treatments for the disorder.

Research may also uncover ways to lower your risk for bipolar disorder. “Even in identical twins, who have identical genes,” McMahon says, “a third escape the illness for reasons we don’t understand. Life experiences or other non-genetic factors may be involved. But we have a poor understanding of what those might be.”

While there’s no cure for bipolar disorder, treatment can help prevent episodes and control their symptoms. Different types of medication can help. So can talk therapy.

If you think you or a family member has bipolar disorder, call your doctor to get assessed. “Getting help sooner rather than later is really important,” McMahon says. “You don’t have to go first to a psychiatrist. Your primary care doctor can get you started.”

If you’re diagnosed with bipolar disorder, Zarate says, learn as much as you can about it. “You as the patient can take responsibility for your own illness and should do everything in your power to stay well,” he says. He suggests mood charting—tracking what brings about episodes and how well the medications are working. Mood charts can help you and your doctor design a more effective treatment plan.

“It’s important to have a good support system of friends and family,” Zarate adds. They can help by learning to spot the signs of an episode and what to do when they see the warning signs.

Be patient. “People sometimes get frustrated,” Zarate says. “These kinds of medications don’t work overnight.” It can take several weeks to control your symptoms—and several months to really stabilize the disorder. So stick to your plan and keep in touch with your doctor.

Don’t be shy about getting help. With treatment, you can lead a successful life.

If you have bipolar disorder, get treatment and stick with it. Here are some tips: