An Ear Full of Trouble

When Your Child Has an Ear Infection 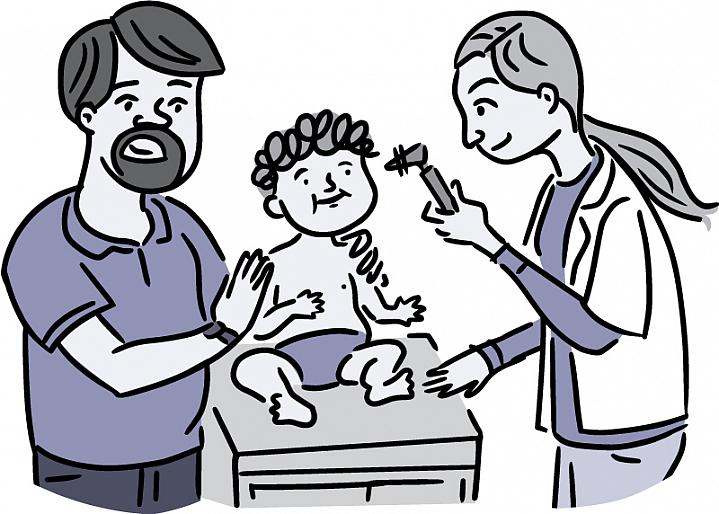 Kids and ear infections—it’s a pairing as familiar as cookies and milk. Ear infections are the most common reason for bringing a child to the doctor. In fact, 3 out of 4 children will have had at least one ear infection by the time they’re 3 years old.

The scientific name for an ear infection is otitis media. It’s an inflammationA protective response of the body, usually to infection or injury, that can cause redness and swelling. of the middle ear, which is located just behind the eardrum. It’s usually caused by bacteria. Ear infections often appear after a cold or other upper airway infection, which can allow bacteria to grow in the middle ear. Fluid may build up behind the eardrum and cause severe ear pain. Other signs and symptoms can include fever and temporary hearingThe sense by which sound is perceived; the capacity to hear. loss.

Children are especially at risk for ear infections, partly because a tube to the ear—called the eustachian tubeA small passageway that connects the middle ear to the upper part of the throat.—is less well developed in kids than in adults. This can make it harder for fluid to drain out and for normal air to get in.

To diagnose an ear infection, your doctor may use a lighted instrument called an otoscope to look at the eardrum. If it’s red and swollen, your child may get a prescription for bacteria-killing drugs called antibiotics. Most kids start to feel better after just a day of treatment. Even so, antibiotics must be taken exactly as directed, usually for 10 days, to keep the infection from coming back.

Sometimes ear pain isn’t caused by infection, and some ear infections get better without antibiotics. So if the diagnosis is uncertain, you may be asked to wait a day to see if the earache goes away on its own. Using antibiotics cautiously helps prevent bacteria from becoming resistant to antibiotics, which could create dangerous situations during future infections.

If the infections keep coming back, your doctor may recommend a surgical procedure that places a small tube in the eardrum. “Research has confirmed that the tubes can prevent infections and maintain a healthy middle ear environment,” says Dr. Gordon Hughes, an ear, nose and throat specialist at NIH. The most commonly used tubes stay in place for 6 to 9 months and require follow-up visits until they fall out.

The best way to prevent ear infections is to avoid things that put your child at risk. Keep kids away from second-hand smoke. Discourage taking a bottle to bed. Wash hands often to prevent the spread of germs. And make sure your child gets the flu vaccine each year.

A new vaccine called PCV13 protects against some of the most common bacteria that cause ear infections. The vaccine is recommended for all children under age 5. Check with your doctor to keep your child’s immunizations up to date.

NIH-funded scientists are working to develop and test additional vaccines. “Researchers are also looking at new ways to deliver high doses of antibiotics across the eardrum, which may help prevent some of the problems of antibiotic resistance,” says Dr. Bracie Watson, an expert in genetics and hearing at NIH.

Although ear infections can be painful and troubling, the good news is that they’re usually easy to treat. And it’s just a matter of time until kids get older and are at less risk.

If your child is too young to say, “My ear hurts,” look for these signs: