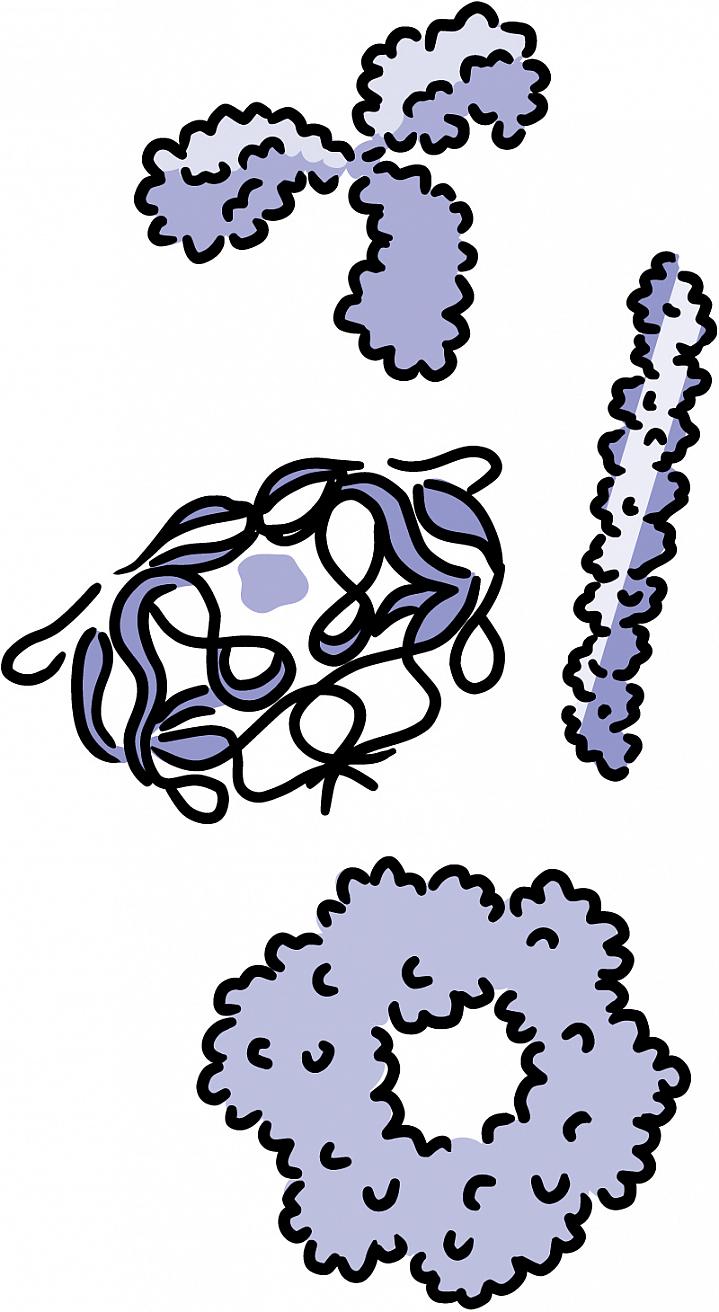 How many proteins do you think you have in your body? The answer is in the billions. Proteins deliver oxygen to your tissues, defend against infection, digest food and even make new proteins. These molecules are uniquely designed to carry out their tasks. If we can understand how protein shapes affect what they do, we might be able to understand what goes wrong in some diseases and develop better treatments.

Proteins are made of long strings of amino acids. These basic building blocks are chained together in a specific sequence dictated by that protein’s geneA stretch of DNA, a substance you inherit from your parents, that dictates the order in which amino acids link together to form a protein.. In less than a second, the chain twists and buckles into a 3-dimensional structure. Each protein’s shape is unique. The shape lets the protein interact with other molecules to trigger all the reactions that run our bodies.

Shape is so important that just one amino acid change can alter a protein’s entire structure—and its performance. These switches can lead to life-threatening disorders like sickle cell disease, cystic fibrosis and Alzheimer’s disease. Knowing a protein’s shape can help scientists design drugs that fix the flawed protein or even block its activity.

Protein structures can also help pinpoint the Achilles’ heels of disease-causing viruses or bacteria. One structure-based success came in 1989, when NIH-funded scientists discovered the shape of HIV protease, a protein that helps the AIDS virus get into our cells. The researchers showed that the protein, like a butterfly, was made up of two equal halves, and the site at the protein’s center was essential for infecting new cells.

Eventually, other researchers used this knowledge to come up with a new class of drugs, called protease inhibitors, that are now widely used to block the action of HIV protease and stop the virus from infecting more cells. Protease inhibitors helped to revolutionize the treatment of HIV/AIDS, transforming HIV infection from a death sentence into a treatable condition that people can live with for decades.

Unfortunately, HIV is a moving target. When it reproduces inside the body, it can churn out slightly altered viruses with different protease shapes. The inhibitor drugs might not work on these altered proteins. Some researchers are now developing new generations of HIV protease inhibitors that will combat these drug-resistant viral strains.

Scientists have also been using their structural knowledge of HIV to develop other approaches for combating the virus. They recently identified an unchanging region on the HIV surface and isolated human antibodiesGerm-fighting molecules made by the body. that react with it. The antibodies were able to stop more than 90% of known global HIV strains from infecting human cells. This advance will hopefully let researchers design more effective HIV vaccines.

Many other scientific problems will benefit from a better understanding of protein shapes. NIH researchers recently used discoveries about the influenza (flu) virus structure to generate antibodies that attack a wide array of influenza viruses in mice, ferrets and monkeys. This accomplishment may point the way to a universal flu vaccine. Trials are already under way in humans to test the approach.

In the future, research on protein structures could lead to new treatments for a variety of diseases and conditions that are more potent, more convenient to take and have fewer side effects.

Did you know you can help NIH scientists fight AIDS by donating unused time on your home computer? FightAIDS@Home provides free software that you download and install. The software uses your computer’s idle cycles to help researchers discover new drugs and build on our growing knowledge of the structural biology of AIDS. To learn more, go to fightaidsathome.scripps.edu.