Can Chocolate Really Be Good for You? 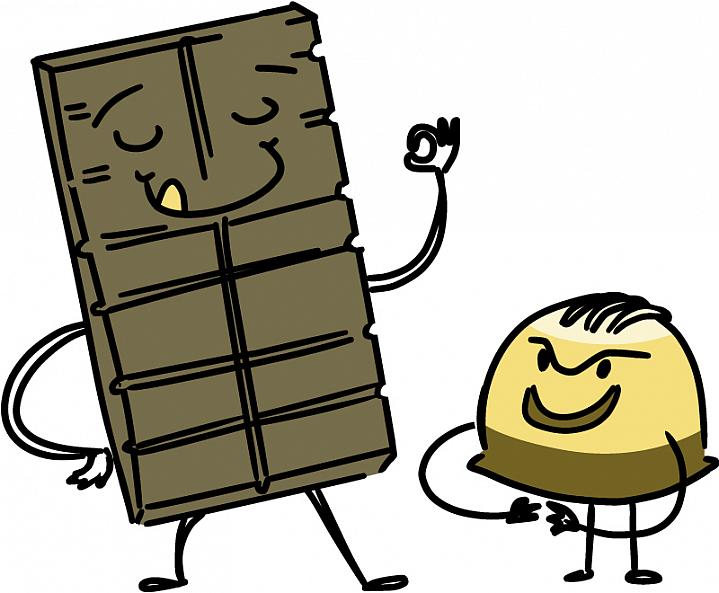 Many of us would love to believe that chocolate is a health food. Maybe you’ve heard or read about its potential benefits. Eating chocolate may have some health pluses, but the research is far from certain. The drawbacks, on the other hand, are clear. Think twice before you reach for that tempting treat.

The idea that chocolate might be good for you stems from studies of the Kuna Indians, who live on islands off the coast of Panama. They have a low risk of cardiovascularThe system of heart and vessels that circulates blood throughout the body. disease or high blood pressure given their weight and salt intake. Researchers realized that genesStretches of DNA, a substance you inherit from your parents, that define characteristics such as how likely you are to get certain diseases. weren’t protecting them, because those who moved away from the Kuna islands developed high blood pressure and heart disease at typical rates. Something in their island environment must have kept their blood pressure from rising.

“What was particularly striking about their environment was the amount of cocoa they consume, which was easily 10 times more than most of us would get in a typical day,” says Dr. Brent M. Egan, a researcher at the Medical University of South Carolina who studies the effect of chocolate on blood pressure.

But Kuna cocoa is a far cry from the chocolate that most Americans eat. The Kuna make a drink with dried and ground cocoa beans (the seeds of the cocoa tree) along with a little added sweetener. The chocolate we tend to eat, on the other hand, is made from cocoa beans that are roasted and processed in various other ways, and then combined with ingredients like whole milk.

Laboratory studies have uncovered several mechanisms that might explain chocolate’s heart-healthy benefits. However, it’s hard to prove whether the chocolate that most Americans eat actually has those effects in the human body. Controlling how much chocolate people eat and tracking them for long periods of time is not an easy task.

“The clinical trials that have been done in people have all been fairly short,” says Dr. Ranganath Muniyappa, an NIH staff clinician who studies diabetes and cardiovascular health. These studies, he explains, look at cardiovascular risk “markers”—factors related to heart health, such as blood pressure—not long-term outcomes like heart disease and stroke.

Studies looking into the long-term health effects of chocolate have relied on people to recall how much chocolate they ate. The researchers then compared those levels with health outcomes. While such studies can find associations, they can’t prove the effects of a particular food.

“People usually eat food in a pattern. A chocolate lover would eat chocolate with something else,” Djoussé explains. “It could be not so much the chocolate by itself, but chocolate in conjunction with, let’s say, whole grain or exercise or not smoking—the pattern of the lifestyle habit in general. It’s really hard to separate the effects of individual components.”

Chocolate contains high levels of compounds thought to help prevent cancer, too. But Dr. Joseph Su, an NIH expert in diet and cancer, says that direct evidence here is similarly hard to come by. Since cancer can take many years to develop, it’s difficult to prove whether eating chocolate can affect disease. Instead, researchers look to see if factors linked to cancer change when chocolate is consumed.

“Right now, some studies show really a remarkable modification of those markers,” Su says. But the evidence that chocolate can reduce cancer or death rates in people is still weak. “There are a few studies that show some effect,” Su says, “but the findings so far are not consistent.”

Some research also suggests that chocolate might help prevent diabetes. However, the challenges in proving this link are similar to those of heart disease and cancer.

Another thing that makes it hard to interpret these studies is that they often use different chocolates, and so their ingredients and health effects may vary.

Compounds called flavanols are thought to be responsible for many of chocolate’s beneficial effects. These compounds are also found in tea, wine, fruits and vegetables. Different chocolates can vary greatly in their flavanol content. Cocoa beans naturally differ in their flavanol levels. A large portion of the flavanols can also be removed during processing. In fact, companies often remove these compounds intentionally because of their bitter taste. The end result is that there’s no way to know whether the products you’re looking at contain high flavanol levels.

So should you eat chocolate? Chocolate can have a lot of calories, and the importance of a healthy weight is well known. “If you’re eating chocolate, make sure to watch the calorie content, the fat content and the sugar content,” Su says.

“For those who are already consuming chocolate, I would advise them to look for the darker ones,” Djoussé adds, “not the white chocolate or the milk chocolate. You won’t get any of the benefit. It’s just going to be unneeded calories.”

But there’s no need to start eating chocolate if you don’t already. “The science doesn’t allow us to make recommendations because the evidence is just not there,” Muniyappa says.

Meanwhile, NIH will continue to fund studies into the health effects of chocolate, and many other foods. Wouldn’t it be sweet if the research proved that chocolate is definitely good for us?

If you don’t eat chocolate now, the research isn’t strong enough to suggest you start. But if you already eat chocolate, here are some healthy tips: