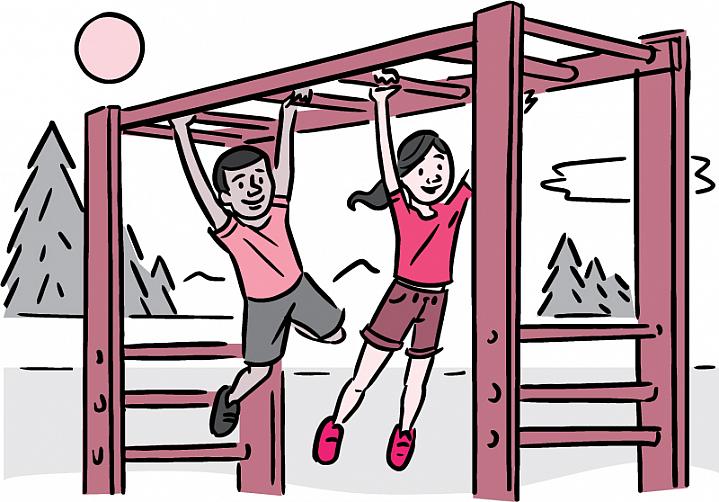 What would childhood be without time to play? Play, it turns out, is essential to growing up healthy. Research shows that active, creative play benefits just about every aspect of child development.

"Play is behavior that looks as if it has no purpose,” says NIH psychologist Dr. Stephen Suomi. “It looks like fun, but it actually prepares for a complex social world.” Evidence suggests that play can help boost brain function, increase fitness, improve coordination and teach cooperation.

Suomi notes that all mammals—from mice to humans—engage in some sort of play. His research focuses on rhesus monkeys. While he’s cautious about drawing parallels between monkeys and people, his studies offer some general insights into the benefits of play.

Active, vigorous social play during development helps to sculpt the monkey brain. The brain grows larger. Connections between brain areas may strengthen. Play also helps monkey youngsters learn how to fit into their social group, which may range from 30 to 200 monkeys in 3 or 4 extended families.

Both monkeys and humans live in highly complex social structures, says Suomi. “Through play, rhesus monkeys learn to negotiate, to deal with strangers, to lose gracefully, to stop before things get out of hand, and to follow rules,” he says. These lessons prepare monkey youngsters for life after they leave their mothers.

Play may have similar effects in the human brain. Play can help lay a foundation for learning the skills we need for social interactions. If human youngsters lack playtime, says Dr. Roberta Golinkoff, an infant language expert at the University of Delaware, “social skills will likely suffer. You will lack the ability to inhibit impulses, to switch tasks easily and to play on your own.” Play helps young children master their emotions and make their own decisions. It also teaches flexibility, motivation and confidence.

Kids don’t need expensive toys to get a lot out of playtime. “Parents are children’s most enriching plaything,” says Golinkoff. Playing and talking to babies and children are vital for their language development. Golinkoff says that kids who talk with their parents tend to acquire a vocabulary that will later help them in school. “In those with parents who make a lot of demands, language is less well developed,” she says. The key is not to take over the conversation, or you’ll shut it down.

Unstructured, creative, physical play lets children burn calories and develops all kinds of strengths, such as learning how the world works. In free play, children choose the games, make the rules, learn to negotiate and release stress. Free play often involves fantasy. If children, say, want to learn about being a fireman, they can imagine and act out what a fireman does. And if something scary happens, free play can help defuse emotions by working them out.

“Sports are a kind of play, but it’s not the kids calling the shots,” says Golinkoff. It’s important to engage in a variety of activities, including physical play, social play and solitary play. “The key is that in free play, kids are making the decisions,” says Golinkoff. You can’t learn to make decisions if you’re always told what to do.

Some experts fear that free play is becoming endangered. In the last 2 decades, children have lost an average of 8 hours of free play per week. As media screens draw kids indoors, hours of sitting raise the risk for obesity and related diseases. When it comes to video games and other media, parents should monitor content, especially violent content, and limit the amount of time children sit.

There’s also been a national trend toward eliminating school recess. It’s being pushed aside for academic study, including standardized test preparation. “Thousands of children have lost recess altogether,” says child development expert Dr. Kathryn Hirsh-Pasek of Temple University. “Lack of recess has important consequences for young children who concentrate better when they come inside after a break from the schoolwork.”

Many kids, especially those in low-income areas, lack access to safe places to play. This makes their school recess time even more precious. In response to these changes, some educators are now insisting that preschool and elementary school children have regular periods of active, free play with other children. The type of learning that happens during playtime is not always possible in the classroom. School recess is also important because of the growing number of obese children in the United States. Running around during recess can help kids stay at a healthy weight.

Play also may offer advantages within the classroom. In an NIH-funded study, Hirsh-Pasek, Golinkoff and their colleagues found a link between preschoolers’ math skills and their ability to copy models of 2- and 3-dimensional building-block constructions. Play with building blocks—and block play alongside adults—can help build children’s spatial skills so they can get an early start toward the later study of science, technology, engineering or math.

“In a way, a child is becoming a young scientist, checking out how the world works,” says Hirsh-Pasek. ”We never outgrow our need to play.” Older children, including teens, also need to play and daydream, which helps their problem-solving and creative imagination. Adults, too, need their breaks, physical activity and social interaction.

At the NIH Clinical Center in Bethesda, Maryland, “Recreation therapy services are seen as essential to the patients’ recovery,” says Donna Gregory, chief of recreational therapy. She and her team tailor activities for both children and adults. Games can get patients moving, even for just minutes at a time, which improves their functioning.

Medical play helps children cope with invasive procedures. A 2-year-old can be distracted with blowing bubbles; older kids can place their teddy bear in the MRI machine or give their doll a shot before they themselves get an injection. It gives kids a sense of control and supports their understanding in an age-appropriate, meaningful way.

Without play and recreation, people can become isolated and depressed. “There’s therapeutic value in helping patients maintain what’s important to them,” says Gregory. “When you are physically and socially active, it gives life meaning.”

Play To Learn and Grow