Your Microbes and You

The Good, Bad and Ugly 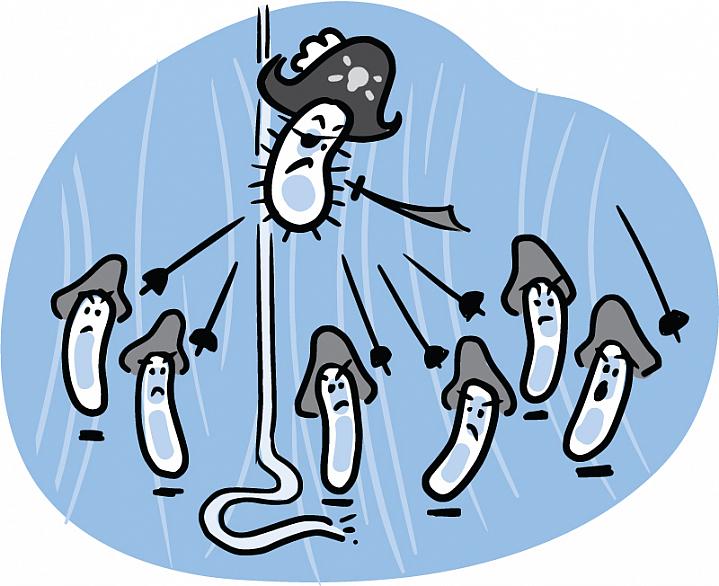 Microscopic creatures—including bacteria, fungi and viruses—can make you ill. But what you may not realize is that trillions of microbes are living in and on your body right now. Most don’t harm you at all. In fact, they help you digest food, protect against infection and even maintain your reproductive health. We tend to focus on destroying bad microbes. But taking care of good ones may be even more important.

You might be surprised to learn that your microbes actually outnumber your own cells by 10 to 1. “The current estimate is that humans have 10 trillion human cells and about 100 trillion bacterial cells,” says Dr. Martin J. Blaser at the New York University School of Medicine.

New techniques allow scientists to study these rich microbial communities and their genes—the “microbiome.” In 2007, NIH launched the Human Microbiome Project to study microbes in and on the body.

Earlier this year, researchers from almost 80 institutions published a landmark series of reports. They found that more than 10,000 different species occupy the human body. The microbiome actually provides more genes that contribute to human survival than the human genome itself (8 million vs. 22,000). Humans need bacteria and their genes more than most of us thought.

One of the most important things microbes do for us is to help with digestion. The mix of microbes in your gut can affect how well you use and store energy from food. In laboratory experiments, transferring bacteria from certain obese mice to normal ones led to increased fat in the normal mice.

Blaser and his colleagues are concerned that changes in our microbiome early in life may contribute to weight problems later. “We’re in the middle of an epidemic of obesity that is very severe,” Blaser says. “It’s relatively recent, it’s widespread across the United States and across the world, and increased calories and decreased exercise seem insufficient to explain this.”

We might be changing our microbiome for the worse, he says, by using antibiotics too often. In a recent NIH-funded study, Blaser’s team found that low-dose antibiotic therapy affected the gut microbiomes of young mice. Antibiotics also altered how the mice used sugars and fats. After 7 weeks, treated mice had up to 15% more fat than untreated mice. This and other studies suggest that gut bacteria can affect both appetite and how you use energy in food.

In related work, Dr. Leonardo Trasande, Blaser and colleagues analyzed data from more than 11,000 children. Although the results weren’t conclusive, they suggest that infants given antibiotics might be at increased risk of becoming overweight. More work will be needed to confirm this connection.

“Microbes in our intestines may play critical roles in how we absorb calories,” Trasande says. “Exposure to antibiotics, especially early in life, may kill off healthy bacteria that influence how we absorb nutrients into our bodies, and would otherwise keep us lean.”

Microbes are also important for your skin, one of the body’s first lines of defense against illness and injury. Skin health depends on the delicate balance between your own cells and the microbes that live on its surface.

“Basically, the healthy bacteria are filling all those little niches so that the more dangerous bacteria can’t get a foothold onto the skin,” says Dr. Julie Segre of NIH.

Segre and other NIH researchers looked at skin microbes collected from different body regions on healthy volunteers. They found that body location has a huge effect on which types of bacteria live. For example, bacteria living under your arms likely are more similar to those under another person’s arm than to the bacteria on your own forearm.

Microbes are also important to the body’s infection-fighting immune system. In one recent study, NIH scientists examined special mice that were born and raised to be germ-free. These mice seemed to have weak immune function. In contrast, normal mice have vibrant bacterial communities and a rich variety of immune cells and molecules on their skin.

The germ-free mice were exposed to Staphylococcus epidermidis, one of the most common bacteria on human skin. Adding this one species of bacteria boosted immune function in the mouse skin. The mice with S. epidermidis were able to defend against a parasite, whereas the bacteria-free mice weren’t.

“We often have a sense that the bacteria that live on our skin are harmful,” Segre says. “But in this study we show that these bacteria can play an important role in promoting health by preventing skin infections from becoming more prolonged, pronounced and more serious.”

There’s strong evidence that the microbes in the female reproductive tract affect reproductive health and help protect against disease. A recent study also found a diverse community of microbes in the male urinary tract and on the penis. NIH-funded researchers are investigating other positive roles for microbes. One major area of research concerns allergy-related conditions, including childhood asthma, skin allergies, hay fever and eczema.

So what can you do to protect against microbes that cause infection but take care of the ones that help you? We know that washing our hands is important for removing harmful microbes—for example, before eating or after using the bathroom.

Other less obvious things can affect your skin microbes, Segre says. The lotions and creams you use can provide a barrier to protect your skin’s moisture, Segre points out, “but in fact you’re also putting a fertilizer onto the microbial garden. You’re really changing the food source for the bacteria that live on your skin.” There’s not one right answer about which skin products are best for you, she says. Experiment to see how different ones affect your skin.

Many researchers worry that some people are trying to get too clean. Blaser thinks that people are using sanitizers and antibiotic products too often these days. “Obviously, there are many bad germs, but I think we’ve gone overboard and it looks like trying to get rid of the bad guys has had a collateral effect on the good guys.”

You’re never alone when it comes to your microbes. But don’t get squeamish about it. Just remember how much you need them.