A Bang to the Brain

What We Know About Concussions 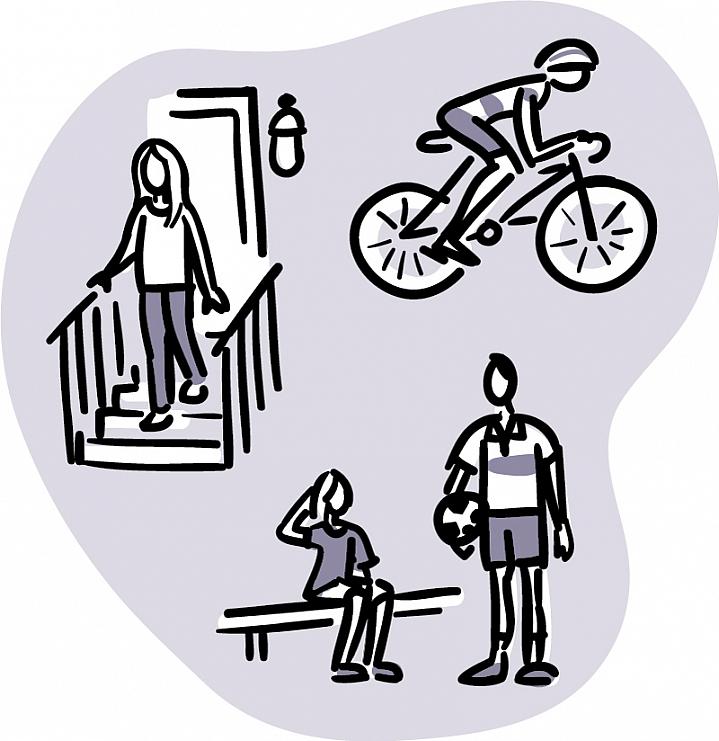 Your brain is your body’s command center. Its soft, sensitive tissues float in a cushioning fluid within the hard and sturdy skull. But a swift blow to the head or violent shaking can override these protections and lead to a mild type of brain injury known as a concussion.

More than 1 million mild traumatic brain injuries occur nationwide each year. These injuries can be caused by falls, car crashes or recreational activities like bike riding, skateboarding, skiing or even playing at the playground. More than half of concussions occur in children—often when playing organized sports such as football and soccer.

“Although concussions are considered to be a mild brain injury, they need to be taken seriously. They should not be treated as minor injuries that quickly resolve,” says Dr. Beth Ansel, an expert on rehabilitation research at NIH. With proper care, most people recover fully from a concussion. “But in some cases, a concussion can have a lasting effect on thinking, attention, learning and memory,” Ansel adds.

A single concussion is also known to raise your risk for having another concussion—and a second concussion may be more severe. It’s important to learn to recognize the causes and symptoms of concussion so you can take steps to prevent or treat these head injuries.

“The skull is designed to prevent most traumas to the brain, but it doesn’t really prevent the brain from moving around inside the skull,” says Dr. Frederick Rivara, a specialist in pediatric injuries and prevention at the University of Washington in Seattle. “A concussion can arise from the brain moving either rapidly back and forth or banging against the side of the skull.” This sudden movement can stretch and damage brain tissue and trigger a chain of harmful changes within the brain that interfere with normal brain activities.

More serious brain injuries that involve skull fracture, bleeding in the brain or swelling of the brain can be detected with X-rays or other imaging methods. But concussions can be more difficult to identify.

“A concussion isn’t visible from the outside, and you can’t see it with standard imaging tools like MRI and CAT scans,” says Dr. Christopher Giza, a pediatric brain specialist at the University of California, Los Angeles. “Instead we look for the signs and symptoms of abnormal brain function to make a diagnosis.”

Common symptoms include nausea, headache, confusion, dizziness and memory problems. Loss of consciousness occurs in about 1 in 10 concussions. A person with a concussion might have trouble answering basic questions and move in an awkward, clumsy way.

“Symptoms can arise quickly, or they can be delayed and appear over the next day or two,” Rivara adds.

For about 9 in 10 people with concussions, symptoms disappear within 7 to 10 days. Scientists have been working to learn more about those who take longer to recover. In one NIH-funded study, Dr. Keith Yeates of Ohio State University looked at 8- to 15-year-olds treated in an emergency room for mild traumatic brain injury.

“We found that the majority of these kids recovered quite quickly or showed no increase in symptoms at all,” Yeates says. “But a subgroup of kids, about 10% or 20%, showed a dramatic onset of symptoms after their injury and persistent symptoms that in some cases remained even 12 months after the injury.”

Body-related symptoms, such as headache and dizziness, tended to fade fairly quickly, the researchers found. But thinking-related symptoms, including problems with memory and paying attention, tended to linger in some kids throughout the year-long study. Children who had lost consciousness or had some additional abnormality that showed up on MRI scans after the injury had an increased risk for lasting problems.

Yeates and others continue to explore ways to predict a person’s response to concussion. Much remains unknown about the underlying biology and outcomes of mild head injuries. Some NIH-funded researchers are looking at how injury and recovery processes differ in immature and adult brains. Other scientists are examining the problems that can arise from repeated injuries to the brain.

Researchers know that immediately after a concussion, the brain is especially vulnerable to having a second, more serious injury. But it’s not clear why—or how long that vulnerable period lasts. Giza and his colleagues have found that a single mild injury reduces the brain’s use of the sugar glucose as a fuel, at least in rats. A second mild injury 24 hours later leads to an even steeper drop in glucose use and memory problems that last longer. But when the brain has several days to recover, and the use of glucose returns to normal, a second mild brain injury seems to be no worse than the first.

“The finding suggests that when you superimpose 2 injuries on top of each other, the consequences can be greater,” Giza says. The brain’s use of glucose might be a way to assess risk and recovery time. “But we don’t yet have a clear understanding of what happens in the human brain after first and second injuries,” Giza adds.

Studies have found that the risk for a second injury is greatest in the 10 days following an initial concussion. If you suspect that someone has a concussion, make sure they stop whatever activity they’re doing, especially if they’re involved in a sport. Their brain dysfunction might not only cloud their thinking. It can also slow reaction times and affect their balance so they become more likely to have another injury.

“If someone has symptoms of concussion, they shouldn’t try to finish the quarter or finish the game. They need to be taken out of play right away and be seen by a health care provider,” Rivara says. “The current recommendations are to avoid physical activity for a period of time until all the symptoms have resolved, and then have a gradual return to play.”

Take steps to avoid concussions. “Wear helmets when appropriate, such as if you’re bicycling, skate-boarding or riding a horse,” says Rivara. Athletes can decrease their risk of concussion by wearing proper headgear and following the rules of good sportsmanship. Make living areas safer for seniors by removing tripping hazards such as throw rugs and clutter in walkways, and install handrails on both sides of stairways.

“The bottom line is that we still need to determine the best ways to prevent, accurately diagnose, treat and assess outcomes after mild traumatic brain injury,” says Ansel.

While this research continues, do what you can to prevent concussions. Learn to recognize the symptoms. And make sure that people with signs of concussion stop their activities and seek medical attention.

Stop activity if you have these symptoms. Athletes should not return to play until evaluated by a health care provider.