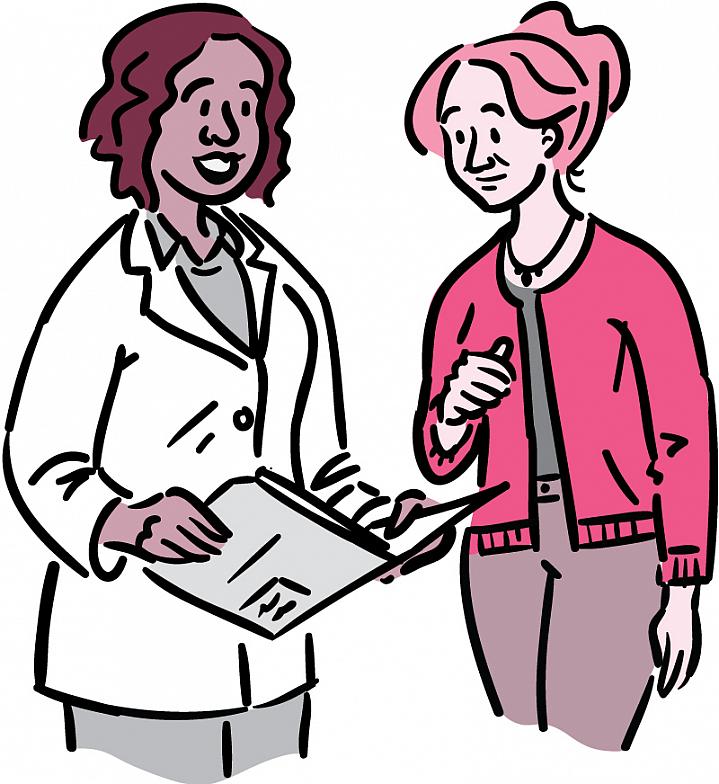 More women are beating breast cancer these days, in part because of improved treatments and screening. When abnormal tissue or cancer is found in its early stages, it may be easier to treat.

NIH-funded scientists are searching for better ways to diagnose, treat, and even prevent breast cancer. Some are studying cancer at the cellular level to learn which tumors pose little danger and can be left alone. Others are developing targeted therapies with fewer side effects and seeking ways to boost survival. Certain drugs are already being used to help prevent breast cancer in some women at greatest risk.

Breast cancer is the second most common kind of cancer among women (after skin cancer). Men can get breast cancer too, although it’s rare. A woman’s risk of developing breast cancer rises as she gets older. Family and personal health history also affect her chances. Risk increases if a close relative has been diagnosed. Risk also goes up the longer a woman is exposed to the hormoneA substance produced in one part of the body to signal another part to react a certain way. estrogen. This means that risk is greater the earlier a woman starts menstruating, the later in life she has her first child, and the later she enters menopause. Exposure to radiation and other environmental factors can also raise the risk of breast cancer.

Warning signs of breast cancer can sometimes be seen or felt. Symptoms include a lump in the breast or armpit, breast pain, unusually firm breast skin, nipple discharge, or changes in the size or shape of the breast. Having one or more of these symptoms doesn’t necessarily indicate cancer. In fact, most lumps are not cancerous. But any of these changes should be discussed with a doctor.

Even before symptoms appear, screening tests can check for early cancer. Mammograms, or X-ray images of the breast, have helped reduce the number of deaths from breast cancer among women ages 40 to 70, especially those over age 50.

“Mammograms decrease the risk of dying of breast cancer, although no screening test is perfect,” says Dr. Barry Kramer, who heads cancer prevention research at NIH.

Mammograms, though, can have some drawbacks. Sometimes mammograms detect tumors that may not cause harm in the long run but are treated anyway. In these cases, women might receive toxic therapies for tumors that weren’t really a threat to their health. In addition, mammograms can sometimes have “false-positive” results; the tissue may look abnormal even though no cancer is present. False-positives can cause fear and anxiety and may lead to unnecessary follow-up testing.

Despite these concerns, mammograms remain an effective screening test. “Mammograms detect 80–85% of all breast cancers,” says Dr. Powel Brown, a breast oncologistA doctor who specializes in treating cancer. at MD Anderson Cancer Center in Houston. “It’s still the best screening test we have, although imaging tests such as breast MRI, ultrasound, and breast tomograms are also being used, particularly in high-risk women.”

Experts recommend that women consult a health care provider at age 40, discuss their risks, and together decide when it’s best to start mammogram screening. Some women may not need to start these tests until age 50. “Screening, like treatment, should be individualized,” Brown says.

“Data shows an approximately 20% relative reduction in death for women who start getting mammograms at age 50 and have them every year or 2,” says Dr. Leslie Ford, who specializes in clinical research and cancer prevention at NIH.

When early-stage breast cancer is detected, the main treatments are surgery and radiation. A lumpectomy removes the affected area, but some women need a mastectomy, removal of the whole breast. Chemotherapy, or cancer-fighting medications, may also be used before or after surgery. In some cases, oncologists use targeted drugs or hormone therapy to treat certain types of tumors.

Once cancer spreads to other parts of the body, there’s no effective cure. Still, new therapies can control metastaticCancer that’s spread to another part of the body. breast cancer to prolong life. Last year, one NIH-funded study found that a combination of 2 drugs can lengthen the lives of postmenopausal women with the most common type of metastatic breast cancer.

When it comes to preventing breast cancer, strategies can vary depending on each woman’s risk. Women at greatest risk include those who’ve already had cancer in one breast and those with a mother, sister, or daughter who’s had breast cancer, especially if they were diagnosed before age 50.

“If you have a strong family history of breast or ovarian cancer, get evaluated by a genetic expert,” Brown recommends. One genetic test looks at the BRCA genes. Women with certain BRCA mutations have a greatly increased risk of developing breast cancer, a risk that rises with age.

“If a woman has a BRCA mutation, she’s faced with deciding at what age to deal with it and how,” says Ford. “She must decide between preventive surgery and monitoring it closely.”

Preventive mastectomy—or surgical removal of a seemingly healthy breast—is an option for women at very high risk for breast cancer. A woman considering this aggressive surgery should talk with her doctor about her cancer risk, the surgical procedure, its potential complications, and alternatives to surgery.

Studies have shown that reducing prolonged exposure to the hormone estrogen might be another way to lower the risk of breast cancer. One preventive approach is to take medicine that blocks the effects of estrogen. Two such drugs, tamoxifen and raloxifene, are sometimes given to women at high risk for breast cancer. Raloxifene can only be given to postmenopausal women. Both of these medicines can have serious side effects. Still, their potential benefits for both prevention and treatment are encouraging. Large NIH-funded primary prevention studies of women at increased risk for breast cancer showed that “tamoxifen and raloxifene each reduced the risk of developing breast cancer by about 50%,” says Ford.

The drug exemestane, which decreases the amount of estrogen produced by the body, also shows promise for preventing breast cancer in at-risk postmenopausal women. Exemestane is usually given after breast cancer treatment to reduce the risk of the cancer returning.

“It’s a lost opportunity to not use these medicines,” says Brown. Women at elevated risk of breast cancer should talk with their doctor about the potential benefits and harms of taking these preventive medicines.

No matter what your risk for breast cancer, you can make healthy changes that might lower your chances of getting the disease. Eat a heart-healthy diet, reduce alcohol intake, don’t smoke, and get regular exercise. Talk to a health care provider about how you might lower your risk of cancer.

Talk To Your Doctor