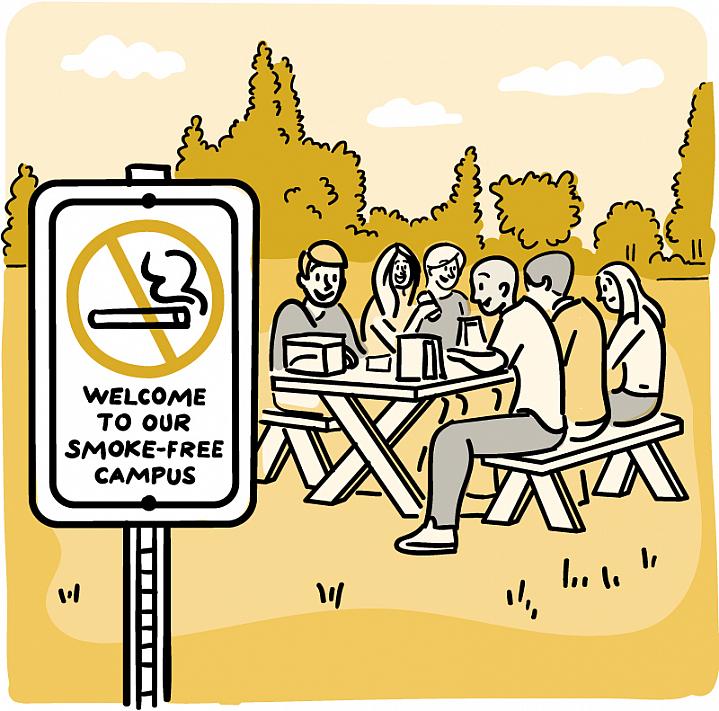 Most of us know that smoking is unhealthy. So why do so many people still do it? The answers are complex. Researchers have found effective ways to help people quit smoking—or prevent them from starting in the first place. The tricky part is putting these tools to use. We can all take steps to help stamp out smoking.

Fifty years ago, the first Surgeon General’s Report on Smoking and Health revealed that smoking cigarettes raises your risk of developing several diseases. Since then, smoking rates have declined, saving millions of lives. But at the same time, more than 20 million Americans have died too soon because of smoking. And more than 3,200 children under age 18 smoke their first cigarette every day as a result of tobacco industry marketing and other influences.

We know a lot more than we used to about the dangers of tobacco smoke. “When you smoke, you inhale thousands of hazardous chemicals,” explains Dr. Michele Bloch, a tobacco control expert at NIH. “They travel all around inside your body and cause damage to numerous parts.”

Cigarette smoke can quickly damage delicate lung tissue. It doesn’t have a chance to heal when it’s exposed to smoke day after day. The result can be a wide range of deadly lung conditions, such as emphysema and chronic bronchitis.

The chemicals from tobacco smoke travel from the lungs into the bloodstream. They damage your heart and blood vessels to cause cardiovascularThe system of heart and vessels that circulates blood through the body. problems, such as heart disease and stroke. Cardiovascular disease kills over 800,000 people a year nationwide.

The compounds in tobacco smoke can enter cells throughout your body and damage the DNA inside. DNA is the long threadlike molecule found in nearly all your cells. It’s an essential “blueprint” that controls how your cells grow, where they go, and what they do.

When DNA gets damaged, cells can begin to grow abnormally. The body usually attacks and kills such cells. But the toxic chemicals in cigarette smoke weaken this process, making it easier for the cells to multiply out of control. The result is cancer.

Smokers dramatically increase their risk of developing many types of cancer. Nearly all lung cancer—the number-one cancer killer—is caused by smoking. Smoking can lead to cancer in many parts of the body, including the throat, mouth, nasal cavity, stomach, pancreas, liver, kidney, bladder, colon, rectum, and cervix. It can also cause leukemia, a cancer of the blood.

Smoking can cause all sorts of other health issues, too. When the DNA in sperm becomes damaged, it can lead to infertility. Smoking while you’re pregnant can cause a host of problems, including low birth weight and preterm delivery. Smokers are 30% to 40% more likely to develop type 2 diabetes than nonsmokers. And smoking can make it harder for the body to fight disease.

“People who are exposed to secondhand smoke from other people’s cigarettes have many of these same problems,” Bloch says. Secondhand smoke contains a mixture of hazardous compounds similar to that inhaled by smokers. Researchers estimate that 2.5 million nonsmokers have died from secondhand smoke since 1964.

The best way to prevent tobacco-related health problems is to keep kids from smoking in the first place. “The vast majority of new smokers begin when they are too young to appreciate the risk,” Bloch says.

“Usually people start smoking when they are adolescents,” explains Dr. Ivan Montoya, an NIH expert on treating substance abuse. “Adolescents who start smoking regularly can very quickly become addicted to nicotine and tobacco. It is then very difficult to quit.”

Nicotine is the primary drug in tobacco that causes addiction. “Nicotine is a very addictive substance,” Montoya says. “It takes only a few contacts with the substance to become addicted.”

It takes just 10 seconds for the nicotine from one puff of smoke to reach the brain. Once it gets there, it causes cells in the brain to release a chemical called dopamine. The dopamine can make you feel calm and satisfied, or alert and focused. Over time, the brain cells of smokers change to expect regular bursts of extra dopamine. When smokers try to quit, their brains crave more nicotine.

“Some people are more susceptible than others to get addicted to tobacco,” Montoya says. Scientists have found some genes that seem to be involved in nicotine dependence, but the work is still ongoing.

Researchers do know that the health of even long-time smokers can improve quickly after quitting. Within a year of quitting, heart attack risk drops dramatically. Within 5 years, the risk of stroke can fall to nearly that of a nonsmoker. Quitting also lowers the risk of cancer and other diseases.

“If you are a smoker, the single most important thing you can do to protect your health and the health of your family is to quit,” Bloch says. “And help is available.”

Research has revealed effective strategies to help people quit smoking. That’s partly why quit rates for smokers are on the rise. More than half of all people who’ve smoked have already quit.

Studies show that people who talk to their doctors about quitting or call quit lines for advice are more successful than those who go it alone. Quitters can double or triple their chances of success by using medications approved by the U.S. Food and Drug Administration (FDA) and nicotine patches, gum, or lozenges, along with coaching support.

E-cigarettes aren’t regulated by FDA. Scientists still don’t know their health effects, including how they could affect attempts to quit smoking. “The evidence is only beginning to come in,” Levy says, and research is ongoing.

NIH-funded scientists continue to look for more effective therapies and approaches to help people quit. Researchers are also developing vaccines against nicotine, Montoya says. The vaccine would prompt your body to identify nicotine as a foreign substance and fight to block it from reaching the brain, which might help extinguish the addiction.

“Quitting is lifesaving, and early quitting is especially good,” Bloch says. Let’s all work to end the use of cigarettes and other tobacco products. If you’re a smoker, free help is available at 1-800-QUIT-NOW (1-800-784-8669) and online at smokefree.gov.

Smoking and Your Heart

Communities and government at all levels can come together to help break the cycle of sickness and death caused by smoking: