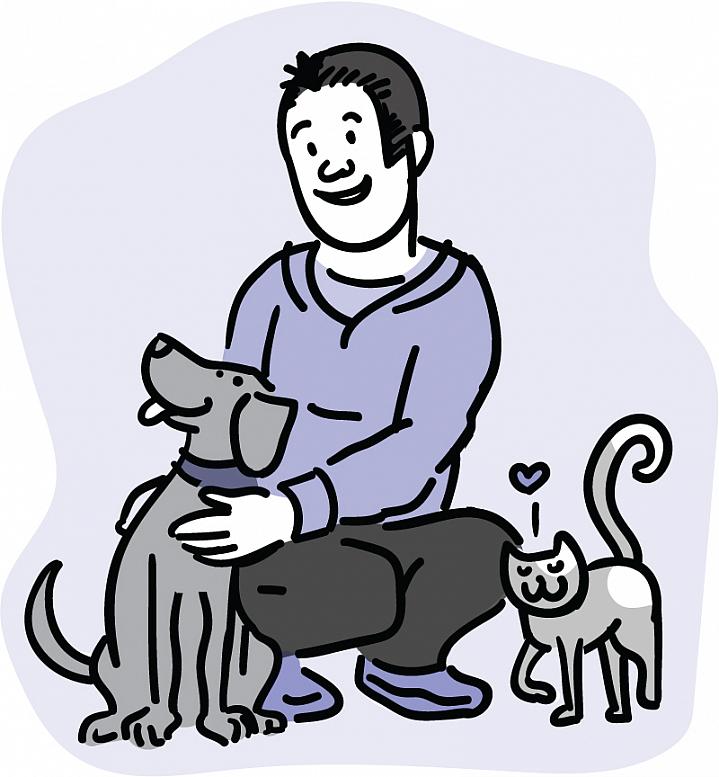 Where would we be without our furry friends? Pet dogs and cats stand by us with love and loyalty, sharing our lives’ ups and downs. Our beloved pets can also share many of the same medical problems that we have, like asthma, diabetes, and even cancer. Doctors, veterinarians, and scientists work together to study diseases that affect both pets and people. The aim is to improve medical care for people as well as our companion animals.

More than half of U.S. households have at least one pet. In 2011, we had more than 144 million pet dogs and cats. Many people consider pets to be part of their family. And like any family member, pets can get sick.

“Our pets live in our houses. They drink the same water and eat some of the same foods. They’re exposed to many of the same environmental risks. They share many of the same genesStretches of DNA, a substance you inherit from your parents, that define characteristics such as how likely you are to get certain diseases., which is why they get many of the same diseases,” says Dr. Amy LeBlanc, a veterinarian and cancer expert at the University of Tennessee.

Pet cats, too, might inherit genes that raise their risk for conditions—like severe kidney disease—that can be similar to human disease. “Cats get asthma just like we do, and they can be allergic to dust mites just like us,” says Dr. Leslie Lyons, an expert in cat genetics at the University of Missouri. “Cats can become obese from eating the wrong kinds of foods and just sitting around the house, which can raise the risk for diabetes, just like us.”

Over the years, NIH-funded studies of dogs and cats with naturally occurring diseases have led to improved therapies for both people and pets. For example, researchers studied an aggressive type of childhood bone cancer that’s rare in people (affecting about 600 children and teens a year) but common in dogs (affecting up to 15,000 a year). The cancer, called osteosarcoma, arises in large bones in the arms and upper legs. By studying pet dogs and people, researchers developed techniques that are now being used to prevent arm and leg amputations and sometimes cure the cancer.

In other research, NIH-funded scientists studied pet dogs with blood cancer to develop better treatments based on bone marrow transplants or stem cell therapies. The improved techniques have now been widely adopted for treating human cancers across the country. The therapies are also used to treat cancer in dogs at some veterinary hospitals.

These types of medical advances are made possible because owners of sick pets enrolled them in veterinary clinical trials. Such trials can help speed the discovery of new and effective therapies for human patients and ultimately improve care for pets too. As in human clinical studies, cats or dogs might receive experimental treatments for cancer or other conditions. Some veterinary clinical studies evaluate different types of imaging techniques that might help humans and animals. Others study the biology of certain genetic conditions that pass down from dogs and cats to their puppies or kittens.

“The idea is that human medicine can learn from the work we do in the veterinary sciences, and vice versa. We can learn from each other,” says LeBlanc. “It’s a concept that’s called ‘one medicine.’ It’s a mutual exchange of discovery.”

“This isn’t a new philosophy; certainly this type of comparative research has been going on for decades,” adds Dr. David Vail, a veterinarian and cancer specialist at the University of Wisconsin-Madison. “But, it’s probably been just in the last 10 years that clinical trials involving pets have become well-organized.”

In 2003, NIH launched a program—called the Comparative Oncology Program—to learn more about the biology and treatment of cancer. Scientists compare natural cancers in people and in animals (mostly pet dogs). Today, the program runs a research network that includes 20 veterinary centers across the United States and in Canada.

Pet dogs with different types of cancer can receive cutting-edge treatments at these centers that might save their lives. At the same time, the studies add to our understanding of cancer in all creatures.

“Because NIH is concerned with human health, the goal of these studies is to develop therapies for people,” says Vail. “But at the end of the day, I’m a veterinarian, and so the two-way flow of information is important to me. I want these treatments to come back to my veterinary clinic.”

Pets participating in NIH-sponsored veterinary clinical studies get a lot of oversight and care. “We spend time talking with pet owners to make sure they understand possible risks and benefits of the study,” LeBlanc says. As in human studies, a data safety and monitoring board tracks the trial’s progress. If serious side effects or other problems arise, the trial will be halted or altered, just as in human studies.

Although much NIH-funded research focuses on dogs, cats are also important in helping to understand human disease. Lyons studies cats with a condition called polycystic kidney disease (PKD). “It’s one of the more common inherited diseases in cats, especially Persian cats, and it’s a common inherited trait in humans,” Lyons says. PKD leads to harmful buildup of fluid-filled cysts on the kidneys.

PKD can hit cats hard when they’re about 7 years old. But it takes much longer to be noticed in people.

“In humans, the condition generally leads to kidney failure later in life, when people are in their 50s or 60s,” says Lyons. “We can’t stop this disease. There are no effective treatments that have been approved for humans that will slow progression of the cysts and delay the onset of kidney failure.”

Lyons and her team are now working to set up veterinary clinical trials for PKD. “If we could find a therapy that helps fix PKD in cats, we could make a lot of cats better. And then, most important, we may be able to develop effective treatments for humans,” says Lyons.

“When owners enroll their pets in a trial, they often hope their pet will benefit. But they also like that they’re contributing to the greater good,” LeBlanc says. “A drug that’s tested in dogs or cats might one day help a very sick person or maybe help some other pets.”

Not all pets can qualify for veterinary clinical research. The pet’s condition needs to match the type of research study under way. If approved for a study, pets often receive medical care free of charge.

To learn about NIH-sponsored comparative studies of cancer, visit NIH’s Comparative Oncology Program website. Your veterinarian might also be able to help you find veterinary clinical trials. Or try looking at the websites of local veterinary schools, which often list ongoing studies of pets.

Healthy Pets and You

Whether human or pet, basic steps for staying healthy can be similar: