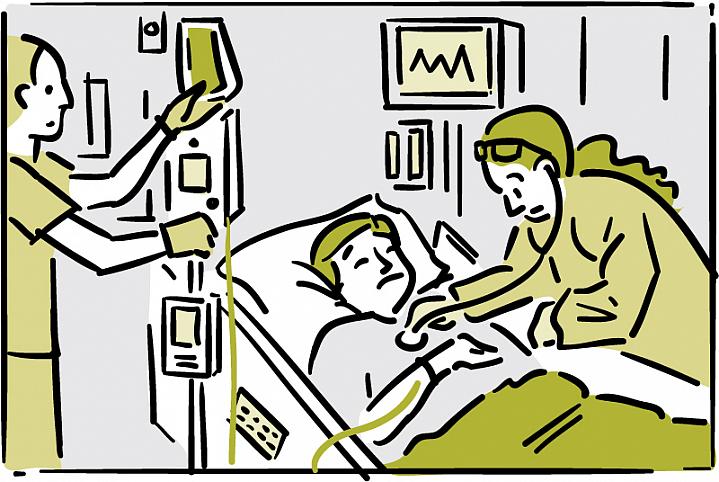 Many people have never heard of sepsis, or they don’t know what it is. But sepsis is one of the top 10 causes of disease-related death in the United States. The condition can arise suddenly and progress quickly, and it’s often hard to recognize.

Sepsis was once commonly known as “blood poisoning.” It was almost always deadly. Today, even with early treatment, sepsis kills about 1 in 5 affected people. It causes symptoms such as fever, chills, rapid breathing, and confusion.

Anyone can get sepsis, but the elderly, children, and infants are most vulnerable. People with weakened immune systems, severe burns, physical trauma, or long-term illnesses (such as diabetes, cancer, or liver disease) are also at increased risk.

At one time, sepsis was thought to arise from an overgrowth of bacteria or other germs in the bloodstream. We now know that sepsis actually springs from 2 factors: first an infection (such as pneumoniaAn infection of the lungs. or a urinary tract infection) and then a powerful and harmful response by your body’s own immune systemThe system that protects your body from invading bacteria, viruses, and other microscopic threats..

“With sepsis, the fight between the infection and the body’s immune response makes the body like a battleground,” says Dr. Derek Angus, a critical care physician at the University of Pittsburgh School of Medicine. “In the case of severe sepsis, that fight results in vital organ dysfunction, which puts one’s life in peril.”

Severe sepsis can damage essential organs like the liver and kidneys. An even more extreme disorder occurs when blood pressure plummets—a condition known as septic shock. “With septic shock, the immune response that’s trying to fight infection can actually lead to a dangerous drop in blood pressure,” Angus says. As blood pressure falls, tissues become starved for oxygen-rich blood. Organs can fail, which could lead to death.

By some estimates, severe sepsis or septic shock strikes nearly 1 million Americans each year. At least 200,000 of them die in the hospital shortly afterward. Many who survive recover completely. But others have lasting problems, including permanent organ damage and thinking difficulties (such as problems with planning, organizing, and multitasking).

Sepsis can be triggered by many types of infections. “But the most common cause of sepsis is community–acquired pneumonia,” Angus says. Scientists are still working to understand why some people with infections develop severe sepsis or septic shock while others don’t.

Researchers are exploring new ways to diagnose, reverse, or prevent this serious and costly condition. Treatment for sepsis is most successful if the condition is spotted early and then treated quickly with antibiotics to fight the infection and fluids to maintain blood pressure.

In a large NIH-funded clinical trial of sepsis care, Angus and his colleagues found that a relatively simple strategy worked as well at preventing deaths as did more complex and costly approaches. “The study helped to clarify that a lot of the treatment steps we’d been using are essential, but the extra steps with sophisticated and invasive procedures aren’t always necessary to improve survival,” Angus says.

Sepsis is a health emergency that requires swift medical care. See a doctor or get emergency assistance if you feel unwell and have a combination of the symptoms listed in the “Wise Choices” box.

Sepsis can be hard to spot, because its early symptoms are similar to many other conditions. Medical personnel look for these signs: