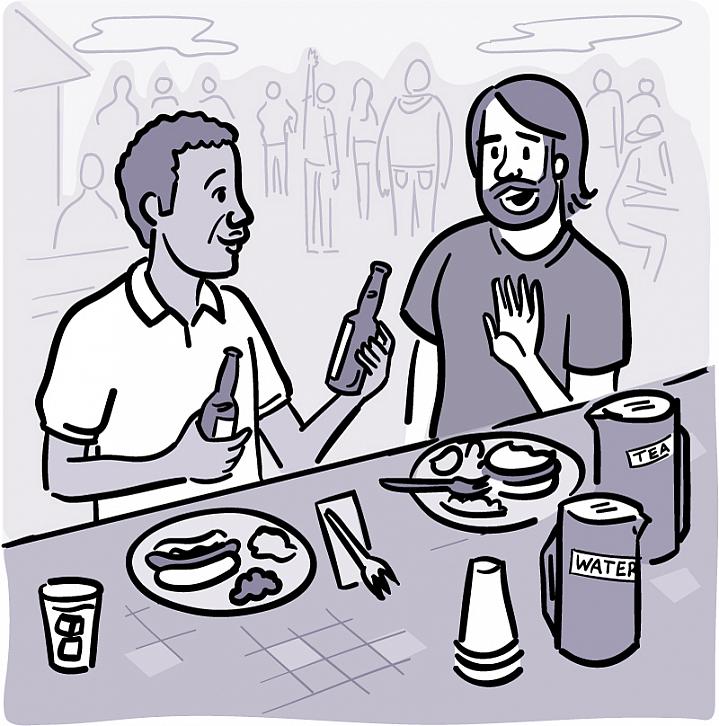 Some people enjoy an occasional glass of wine with dinner. Others might grab a beer while watching a football game. Most people drink alcohol moderately, within their limits. Others overdo it occasionally. But some people find they can’t control their drinking. How do you know when drinking is becoming a problem? And what can you do if it is?

About 18 million Americans have an alcohol use disorder. Drinking too much alcohol raises your risk of injury and accidents, disease, and other health problems. Heavy drinking is one of the leading causes of preventable deaths in this country, contributing to nearly 88,000 deaths each year.

How much is too much? Men shouldn’t have more than 14 drinks per week and 4 drinks on any single day. Women shouldn’t have more than 7 drinks per week and no more than 3 drinks on any day. But you might be surprised at what counts as a drink. A 5-ounce glass of table wine, a 12-ounce glass of regular beer, and 1½ ounces of hard liquor each contain the same amount of alcohol, and each counts as 1 drink. You may need to adjust the amount you drink depending on how alcohol affects you. Some people—such as pregnant women or people taking certain medications—shouldn’t drink alcohol at all.

Alcohol problems come from drinking too much, too fast, or too often. People with alcohol dependence are addicted to alcohol, and they can’t control their drinking. When alcohol-dependent people try to stop drinking, they may feel anxious and irritable—so they may drink some more, and it becomes a vicious cycle.

“Addiction has 3 major problems: You lose your ability to feel good, you get more stressed, and you have a hard time making proper decisions,” says Dr. George Koob, director of NIH’s National Institute on Alcohol Abuse and Alcoholism. “That’s a recipe for disaster.”

Signs of an alcohol problem include drinking more, or more often, than you intended, or making unsuccessful attempts to cut back or quit. People with alcohol problems often have trouble functioning at work, home, or school.

“A good indicator is that something is out of whack. Is your personal life deteriorating because of your drinking? Are people starting to shun you? If you’re feeling generally miserable, that’s a warning sign,” Koob says. “You don’t have to hit bottom. You’ll save yourself a lot of damage socially, professionally, and probably in your own body if you attend to an alcohol problem a lot earlier.”

Studies show that most people with an alcohol use disorder can benefit from some form of treatment. If you or someone you care about may have an alcohol problem, help is available. The first step is to talk to a primary care doctor. In some cases, a brief intervention, or an honest conversation about drinking habits and risks, is all the person needs. If the problem is more serious, the doctor can help create a treatment plan, prescribe medications, or refer the person to a specialist. In more severe cases, the doctor might recommend a treatment clinic or in-patient addiction center.

“Alcohol dependence is a complex, diverse disorder. There’s not one treatment that works for everybody,” says Dr. Raye Litten, an alcohol treatment and recovery expert at NIH. “If one treatment doesn’t work, you can try another one. Sometimes a combination of these will work.”

Medications can help people stop or reduce their drinking. Three medications are approved by the U.S. Food and Drug Administration for treating alcohol use disorders. One of these, disulfiram, causes unpleasant side effects such as nausea, vomiting, and a racing heart rate if you consume any alcohol while taking the drug. Understandably, some people don’t want to take this medication for that reason. The 2 other drugs, naltrexone and acamprosate, also have been shown effective at reducing alcohol craving in many heavy drinkers.

Additional medications are under study as possible treatments for alcohol use disorders. These include a handful of medicines already approved to treat other medical conditions. For example, the drug gabapentin is now used to treat pain and other conditions, but it also has shown promise for reducing heavy drinking in clinical research trials. Gabapentin may reduce alcohol cravings as well as anxiety, trouble sleeping, and other symptoms associated with alcohol use disorders.

NIH researchers are working to develop other approaches as well. Some are exploring a possible connection between appetite and alcohol craving. Leggio is studying a hormoneMolecule sent through the bloodstream to signal another part of the body to react a certain way. in the stomach called ghrelin. His research suggests that when ghrelin is elevated, people feel hungry and also crave more alcohol. His lab is testing an experimental drug designed to block this hormone to help reduce alcohol craving. The drug is now being assessed in early trials at the NIH Clinical Center in Maryland.

“There’s not going to be a drug that cures you of alcoholism,” Koob says. “I think that drugs can help you along the way, so that some of the chemical changes in the brain can return to normal. Strengthen that with behavioral therapy to make recovery as permanent as you can.”

Behavioral therapy, such as counseling or support groups, can help people develop skills to avoid or overcome stress and other triggers that could lead to drinking. The approach can help people set realistic goals, identify the feelings and situations that might lead to heavy drinking, and offer tips to manage stress. It also helps to build a strong social support network.

If the treatment plan created by your health care team is working, it’s important to stick to that plan. Many people repeatedly try to cut back or quit drinking, have a setback, then try to quit again. Think of an alcohol relapse as a temporary setback and keep persisting toward full recovery.

“You always have to be aware there’s a possibility of relapse and temptation,” says Koob. “Any recovering alcoholic will tell you it’s a daily fight for a long time.”

How to Find Alcohol Treatment

Drinking too much alcohol? Here are some tips to help cut back: