Steps Toward a Healthier Life 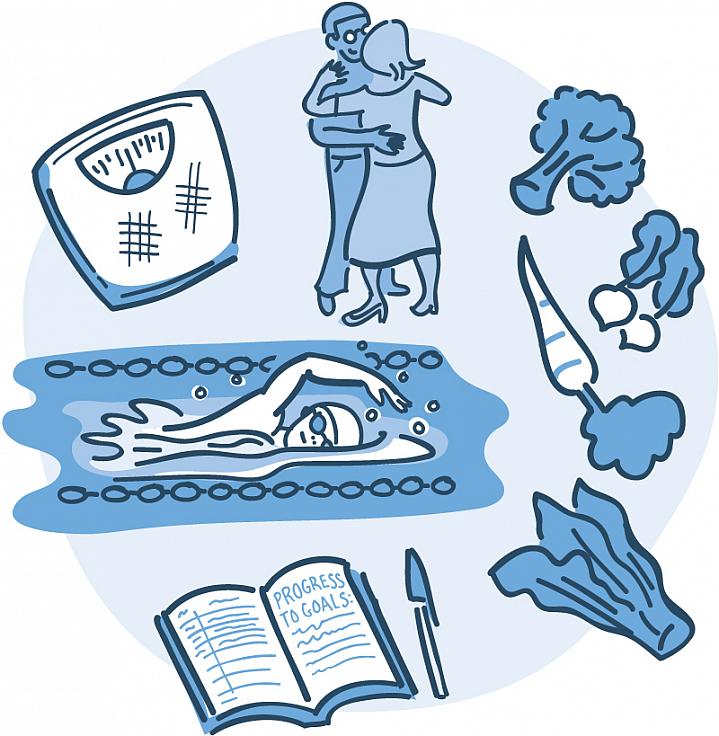 People with diabetes have a problem with blood sugar. Their blood sugar, or blood glucose, can climb too high. Having high levels of sugar in your blood can cause a lot of trouble. Diabetes raises your risk for heart disease, blindness, amputations, and other serious issues. But the most common type of diabetes, called type 2 diabetes, can be prevented or delayed if you know what steps to take.

About 29 million Americans, or nearly 1 in 10 people, have diabetes. Many more have a condition called prediabetesA condition in which blood sugar is higher than normal, but not high enough to be called type 2 diabetes.. People with prediabetes usually have no symptoms, yet they’re at risk for eventually developing type 2 diabetes, heart disease, and stroke.

Research shows that you can greatly reduce your risk for type 2 diabetes and prediabetes by eating a healthy diet, getting plenty of physical activity, and losing excess weight.

Type 2 diabetes arises because of problems related to a hormoneA substance produced in one part of the body to signal another part to react a certain way. called insulin. When our bodies digest the foods we eat, they’re broken down and converted to glucose and other molecules, which then travel through the bloodstream. Insulin signals cells to let glucose in for use as an energy source. When a person has type 2 diabetes, either the body’s cells have trouble using insulin, or the body isn’t producing enough insulin. As a result, glucose can build up to harmful levels in the blood.

Type 2 diabetes occurs most often in people who are middle-aged or older, but younger people can get it too. “Before the mid- to late-1990s, we almost never saw type 2 diabetes in youth,” says Dr. Barbara Linder, an NIH expert on childhood diabetes. But now, type 2 diabetes is becoming more common in young people, alongside increasing rates of childhood obesity.

Some factors that raise people’s risk for type 2 diabetes are beyond their control. Having an immediate family member with diabetes increases your risk. Type 2 diabetes is also more common in some races or ethnicities, including African-Americans, Alaska Natives, American Indians, Asian-Americans, Pacific Islanders, and Hispanic/Latinos.

People who are overweight, obese, or inactive are also much likelier to develop type 2 diabetes. But these are risk factors that you can change, and doing so will greatly reduce your risk for diabetes.

To understand how weight loss might affect diabetes risk, NIH launched a study in the early 1990s called the Diabetes Prevention Program. Doctors already knew that being overweight or obese was a risk factor for diabetes, but they didn’t know if losing weight would reduce that risk.

The study enrolled more than 3,000 people who were overweight and had prediabetes. They were randomly assigned to different groups.

One group met regularly with study staff to focus on healthy behaviors, such as eating fewer calories and exercising more; they aimed to lose at least 7% of their body weight and to do at least 150 minutes of physical activity per week. Another group received metformin, a drug commonly used to treat type 2 diabetes, along with standard advice on diet and exercise. A control group received standard advice and an inactive placebo pill, which had no drug effects.

After an average of around 3 years, the researchers found that diabetes risk dropped by 58% in the group encouraged to make healthy lifestyle changes. About 38% in that group had achieved and maintained their weight loss goals and 58% their physical activity goals. The group taking metformin was also less likely to develop diabetes; their risk dropped by 31% compared to the control group.

Metformin has long been used and approved for treating type 2 diabetes. However, the U.S. Food and Drug Administration hasn’t approved the drug for preventing type 2 diabetes. Research suggests that the drug’s preventive effects may work best in younger and heavier people. For older people, lifestyle changes were especially helpful; they lowered diabetes risk by 71%.

“Weight loss is key, and physical activity is very important, but lifestyle changes are never easy,” says NIH’s Joanne Gallivan, director of the National Diabetes Education Program (ndep.nih.gov). The program offers resources to help with weight loss, healthy eating, and physical activity. Specific tips are provided for certain groups of people, such as children and older adults. Most materials are offered in Spanish, and some are available in other languages.

As the Diabetes Prevention Program showed, diet and exercise can reduce the risk of developing type 2 diabetes. You’re most likely to succeed at weight loss, Linder says, “if you can find some physical activity that you enjoy and can do every day.”

Experts recommend that people at risk for type 2 diabetes should exercise weekly at moderate intensity for 150 minutes. That’s 30 minutes, 5 times a week.

“Get your heart rate up a bit. Work up a mild sweat,” says Harvard’s Dr. David Nathan, who leads the Diabetes Prevention Program studies. The training program used in the study is now widely available; for instance, the YMCA now offers a program based on the study.

If you think you might have prediabetes or diabetes, your doctor can help you decide what to do. A blood test called the A1C test can check your average blood glucose level to see if you have prediabetes.

Nathan says that people over 45 should be screened for diabetes, as should other people at increased risk. Risk factors and warning signs for type 2 diabetes include high blood pressure, high cholesterol, or a history of gestational diabetes or cardiovascular disease.

In 2012, 1.7 million Americans ages 20 and older were newly diagnosed with diabetes. “That’s not good, but it’s actually less than the 1.9 million new cases we had in 2010,” Nathan says. “It may just be that we are turning the corner a little bit.”