How Being Male or Female Can Affect Your Health 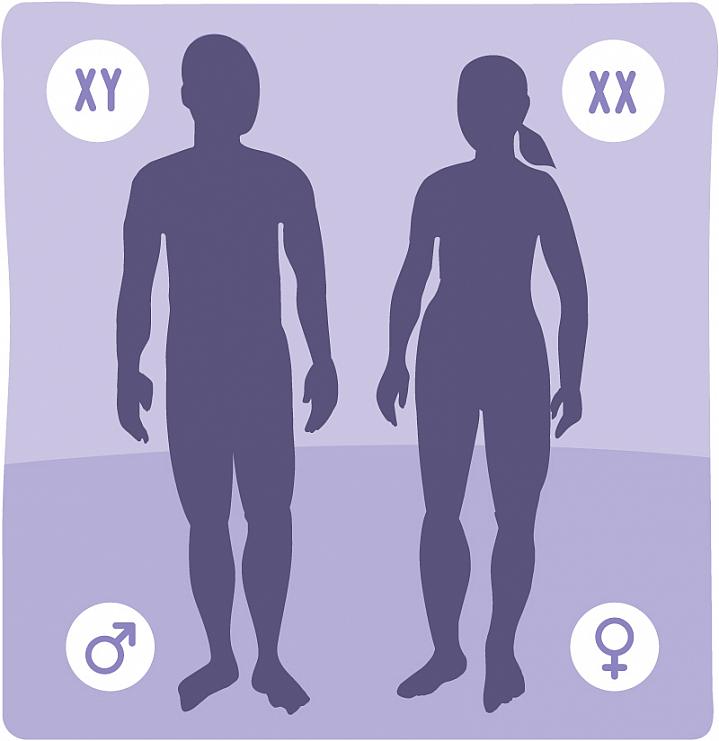 Are you male or female? The answer to this seemingly simple question can have a major impact on your health. While both sexes are similar in many ways, researchers have found that sex and social factors can make a difference when it comes to your risk for disease, how well you respond to medications, and how often you seek medical care. That’s why scientists are taking a closer look at the links between sex, gender, and health.

Many people use the words sex and gender interchangeably, but they’re distinct concepts to scientists.

Defining Differences — Sex is biological. It’s based on your genetic makeup. Males have one X and one Y chromosomeStructure made of genetic material and proteins. Humans normally have 46 chromosomes (23 pairs) in each cell. in every cell of the body. Females have two X chromosomes in every cell. These cells make up all your tissues and organs, including your skin, heart, stomach, muscles, and brain.

Gender is a social or cultural concept. It refers to the roles, behaviors, and identities that society assigns to girls and boys, women and men, and gender-diverse people. Gender is determined by how we see ourselves and each other, and how we act and interact with others. There’s a lot of diversity in how individuals and groups understand, experience, and express gender. Because gender influences our behaviors and relationships, it can also affect health.

Influences on Health — “Sex and gender play a role in how health and disease affect individuals. There was a time when we studied men and applied those findings to women, but we’ve learned that there are distinct biological differences between women and men,” explains Dr. Janine Austin Clayton, who heads research on women’s health at NIH. “Women and men have different hormones, different organs, and different cultural influences—all of which can lead to differences in health.”

As scientists learn more about the biology of males and females, they’re uncovering the influences of both sex and gender in many areas of health.

For instance, women and men can have different symptoms during a heart attack. For both men and women, the most common heart attack symptom is chest pain or discomfort. But women are more likely than men to have shortness of breath, nausea and vomiting, fatigue, and pain in the back, shoulders, and jaw. Knowing about such differences can lead to better diagnoses and outcomes.

“Without studying both sexes, we wouldn’t know if we’re taking steps in the right direction toward appropriate clinical treatment for men and women,” Clayton says. “Our differences also affect how we respond to medications, as well as which diseases and conditions we may be prone to and how those diseases progress in our bodies.” For example, women metabolize nicotine faster than men, so nicotine replacement therapies can be less effective in women.

Attention to Addiction — Scientists are finding that addiction to nicotine and other drugs is influenced by sex as well. “When it comes to addiction, differences in sex and gender can be found across the board,” says Dr. Sherry McKee, lead researcher at an NIH-funded center at Yale University that studies treatments for tobacco dependence. “There are different reasons men and women pick up a drug and keep using a drug, and in how they respond to treatment and experience relapse. Sex also influences disease risk in addiction. For example, women who smoke are more susceptible to lung and heart disease than men who smoke.”

One NIH-funded research team has detected some of these differences in the brain. In a recent study, 16 people who smoke—8 men and 8 women—underwent brain scans while smoking to create “movies” of how smoking affects dopamine, the chemical messenger that triggers feelings of pleasure in the brain.

These brain movies showed that smoking alters dopamine in the brain at different rates and in different locations in males and females. Dopamine release in nicotine-dependent men occurred quickly in a brain area that reinforces the effect of nicotine and other drugs. Women also had a rapid response, but in a different brain region—the part associated with habit formation. “We were able to pinpoint a different brain response between male and female smokers, a finding that could be useful in developing sex-specific treatments to help smokers quit,” says lead study researcher Dr. Kelly Cosgrove, a brain-imaging expert at Yale University.

Finding better ways to help men and women quit smoking is important for everyone’s health. More than 16 million Americans have diseases caused by smoking. It’s the leading cause of preventable death in the U.S.

Autoimmune DisordersConditions in which the body’s immune system mistakenly attacks and destroys the body’s own cells. — Scientists have found sex influences in autoimmune disorders as well. About 80% of those affected are women. But autoimmune conditions in men are often more severe. For instance, more women than men get multiple sclerosis (MS), a disease in which the body’s immune systemThe body’s defense against germs and foreign substances. attacks the brain and spinal cord. But men seem more likely to get a progressive form of MS that gradually worsens and is more challenging to treat.

“Not only are women more susceptible to MS, but women also have many more considerations in the management of the disease, especially since it often begins during child-bearing years,” says Dr. Ellen Mowry, a specialist who studies MS at Johns Hopkins University.

“There are a lot of unanswered questions when it comes to the study of sex differences in MS and other autoimmune disorders,” Mowry explains. “Researchers can learn a lot by studying women and men separately and together, considering possible risk or predictive factors that may differ based on sex or gender, and working collaboratively with other scientists to improve the likelihood of detecting these factors.”

Building Our Understanding — “NIH now requires scientists to ask: ‘What are my research results for males and for females?’” Clayton says. “We need to learn more about the roles of sex and gender in health and disease. Understanding these influences improves health and saves the lives of both men and women.”

You can improve your health and that of your loved ones by being more aware of sex and gender differences. See the Wise Choices box for details, and talk to your health care provider about any concerns you might have.

Getting a Genetic Test