Do Social Ties Affect Our Health?

Exploring the Biology of Relationships 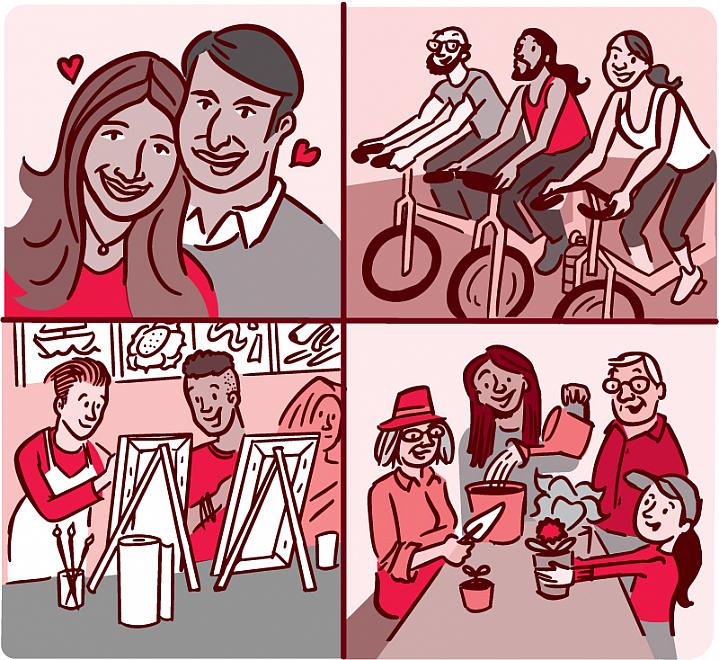 Cuddles, kisses, and caring conversations. These are key ingredients of our close relationships. Scientists are finding that our links to others can have powerful effects on our health. Whether with romantic partners, family, friends, neighbors, or others, social connections can influence our biology and well-being.

Wide-ranging research suggests that strong social ties are linked to a longer life. In contrast, loneliness and social isolation are linked to poorer health, depression, and increased risk of early death.

Studies have found that having a variety of social relationships may help reduce stress and heart-related risks. Such connections might improve your ability to fight off germs or give you a more positive outlook on life. Physical contact—from hand-holding to sex—can trigger release of hormonesSubstances produced in one part of the body to signal another part to react a certain way. and brain chemicals that not only make us feel great but also have other biological benefits.

Marriage is one of the most-studied social bonds. “For many people, marriage is their most important relationship. And the evidence is very strong that marriage is generally good for health,” says Dr. Janice Kiecolt-Glaser, an expert on health and relationships at Ohio State University. “But if a relationship isn’t going well, it could have significant health-related consequences.”

Married couples tend to live longer and have better heart health than unmarried couples. Studies have found that when one spouse improves his or her health behaviors—such as by exercising, drinking or smoking less, or getting a flu shot—the other spouse is likely to do so, too.

When marriages are full of conflict, though, such health benefits may shrink. In NIH-funded studies, Kiecolt-Glaser and her colleagues found that how couples behave during conflict can affect wound healing and blood levels of stress hormones. In a study of more than 40 married couples, the researchers measured changes to body chemistry over a 24-hour period both before and after spouses discussed a conflict. The troublesome topics included money, in-laws, and communication.

“We found that the quality of the discussion really mattered,” Kiecolt-Glaser says. Couples who were more hostile to each other showed much larger negative changes, including big spikes in stress hormones and inflammation-related molecules. “In the more well-functioning marriages, couples might acknowledge that they disagree, or find humor in the situation, but they don’t get sarcastic or roll their eyes when the other is talking,” Kiecolt-Glaser says. In a related study, blister wounds healed substantially more slowly in couples who were nastier to each other than in those who were kinder and gentler during difficult discussions.

Couples with the “double-whammy” of hostile marriages and depression may also be at risk for weight problems. After eating a high-fat meal and discussing a difficult topic, these troubled couples tended to burn fewer calories than less hostile counterparts. “The metabolism in these couples was slower in ways that could account for weight gain across time,” Kiecolt-Glaser says. Compared to the kinder couples, the distressed spouses had signs of more fat storage and other risks for heart disease.

The quality of a marriage—whether supportive or hostile—may be especially important to the health of older couples. Dr. Hui Liu at Michigan State University studied data on the health and sexuality of more than 2,200 older people, ages 57 to 85. Good marriage quality, she found, is linked to reduced risk of developing cardiovascular disease, while bad marriage quality is tied to increased risk, particularly in women. “The association between marriage quality and heart health becomes increasingly strong at older ages,” Liu says.

Liu and colleagues are also looking at the links between late-life sexuality and health, including whether sex among the very old is beneficial or risky to heart health. “Some people assume that sex isn’t important in older ages, so those ages are often overlooked in research studies related to sex,” Liu says. “But our studies suggest that for many older people, sex quality and sex life are important to overall quality of life.”

In one recent analysis, Liu and co-workers found that older women who reported having a satisfying sex life were at reduced risk for high blood pressure 5 years later. But the researchers also found that some older men, ages 57 to 85, were at increased risk for certain heart-related problems after 5 years if they reported having frequent (at least once a week) or extremely enjoyable sex. The reasons for these increased risks aren’t clear and are still under study. Experts suggest that older men and women talk with their doctors about concerns related to sexual issues or potential health risks. Learn more about sexuality in later life at www.nia.nih.gov/health/publication/sexuality-later-life.

Other types of relationships are important, too. These can include friends, family, neighbors, co-workers, clubs, and religious groups. Studies have found that people who have larger and more diverse types of social ties tend to live longer. They also tend to have better physical and mental health than people with fewer such relationships. Social support may be especially protective during difficult times.

Dr. Sheldon Cohen, a psychologist at Carnegie Mellon University in Pittsburgh, has been exploring the links between relationships and health for more than 3 decades. In one study, his team exposed more than 200 healthy volunteers to the common cold virus and observed them for a week in a controlled setting. “We found that the more diverse people’s social networks—the more types of connections they had—the less likely they were to develop a cold after exposure to the virus,” Cohen says. He and his team have since found evidence that people with more types of connections also tend to have better health behaviors (such as not smoking or drinking) and more positive emotions.

The scientists have also been exploring whether simply believing you have strong social support may help protect against the harms of stress. “Long-term conflicts with others are a potent stressor that can affect health. But we’ve found that its effects are buffered by perceived social support,” Cohen says. “People who have high levels of conflict and low levels of social support are much more likely to get sick when exposed to a virus. But those with high conflict and high levels of social support seem protected.” In addition, hugging seemed to shield against stress. People who reported having more frequent hugs were less likely to develop an infection after viral exposure.

Social ties can have mixed effects on our health. But overall, research suggests that the benefits of interactions with others can outweigh any risks. “It’s generally healthy for people to try to belong to different groups, to volunteer in different ways, and be involved with a church or involved in their neighborhood,” Cohen says. “Involvement with other people across diverse situations clearly can have a very potent, very positive effect on health.”

Social connections might help protect health and lengthen life. Look for ways to get involved with others: