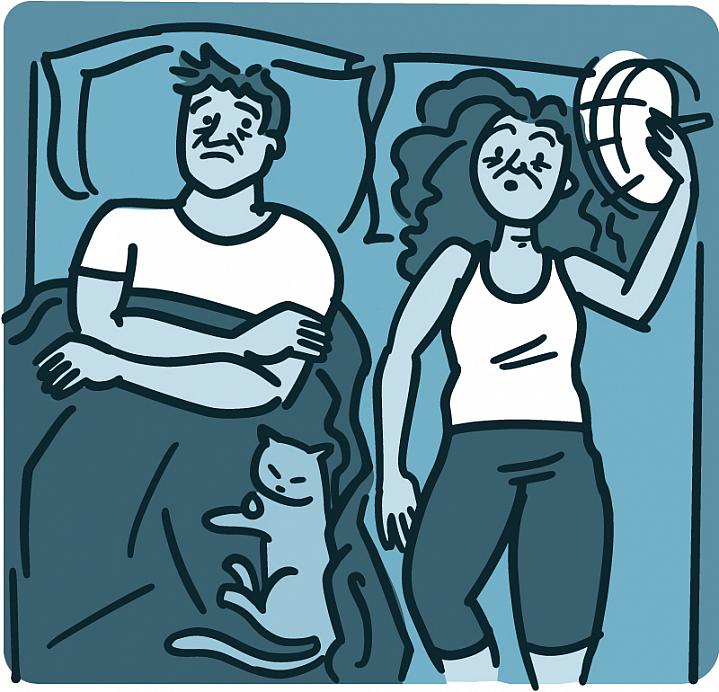 During midlife, a woman’s menstrual periods grow further and further apart. At some point, they stop completely, and she can no longer get pregnant.

This is because the ovaries aren’t releasing eggs and making hormonesSubstances sent through the bloodstream to signal another part of the body to grow or react a certain way. like estrogen anymore. After 12 months without a period, a woman can say she’s gone through menopause.

In the years before menopause, women may experience skipped and unpredictable menstrual periods. This phase is called the midlife transition, perimenopause, or the change of life. Some women go through the transition faster than others. It lasts between 1 and 10 years.

Typically, menopause occurs between ages 45 and 55. This means women can expect less frequent periods and other symptoms at some point during their 40s. But it’s different for every woman. There’s no lab test to predict when in life it will start or how easy it will be.

Along with unpredictable periods, a woman may have other symptoms—both physical and emotional. Hot flashes, poor sleep, and mood changes are common. Some women have vaginal dryness, weight gain, and thinning hair. Bone density may also start to decrease.

“Most people don’t have severe symptoms. Most people have mild or less frequent symptoms,” says Dr. Hadine Joffe, an NIH-supported menopause researcher and psychiatrist at Brigham and Women’s Hospital.

NIH is funding studies looking into how to relieve menopause symptoms. There are medicines and lifestyle changes that can help.

“No two people are going to go through menopause in exactly the same way,” explains Dr. Chhanda Dutta, who oversees clinical aging research at NIH. “Different women go through menopause with different kinds of symptoms, and we’re trying to give them options for how they can manage them.”

Hot flashes are a common symptom during the midlife transition. Many women have these for several years after menopause. Some experience hot flashes for 10 or more years.

A mild hot flash feels like being embarrassed, Joffe says. “There’s a wave of heat sensation that rises to your head and chest, and sometimes you look red, feel hot, and then it’s gone.”

A not-so-mild hot flash can make your skin appear very red. Your head, neck, and chest may become hot and sweaty.

“It’s particularly disruptive at night,” Joffe says. “People are waking up, feeling very hot and sweaty, and they have weird, disrupted sleep.”

NIH-supported studies have found some medicines that reduce hot flashes. The most effective FDA-approved treatment is low-dose hormone therapy. Some women are given estrogen or estrogen with another hormone, progestin. Women take hormone therapy for the shortest time that they need it.

Not every woman can take hormone therapy. Another option is an antidepressant that is FDA-approved for treating moderate to severe hot flashes.

A doctor can help determine which medicine might work best. See the Wise Choices box for other ways to outsmart hot flashes.

During midlife, women may start having trouble sleeping because of changes in hormone levels. Hot flashes and night sweats can also cause women to wake up.

“In people who have hot flashes at night, their sleep is disrupted throughout the entire night. It’s like a ripple of a sleep irritation throughout the whole night,” Joffe says. A woman may feel tired the next day as a result.

The medicines that help with hot flashes may also help ease sleep issues. But other things can help, too.

If a hot flash or anything else wakes you up, avoid looking at a clock. “It’s much easier to fall back to sleep if you don’t know what time it is,” Joffe advises.

She also says to avoid tossing and turning. If you wake up, get out of bed briefly to read and then get back into bed to go back to sleep.

Exercise can also help women sleep better at night. It’s best to avoid caffeine and alcohol for several hours before bedtime, too. Both can disrupt sleep.

For women who have a hard time falling asleep, relaxation breathing can help. Slowly breathe in through your nose. With a hand below your ribs, feel your stomach push your hand out. Slowly exhale through your mouth. You can do this for several minutes to relax.

During perimenopause, many women become irritable or feel moody. Some may feel sad and anxious and unable to enjoy things as much as they used to.

If a woman has these symptoms day after day for at least 2 weeks, she may be dealing with a clinical depression. “There is a two- to three-fold risk of depression during perimenopause,” says NIH psychiatrist and researcher Dr. Peter J. Schmidt.

Although most women don’t have a problem with depression during this transition, he explains, changes in hormones can bring a negative mood for some women. Researchers are studying how to counteract the effects of shifting hormone levels.

Schmidt and his colleagues found that women who were at risk of depression and taking estrogen therapy were less likely to become depressed during perimenopause. The medicine prevented dips in estrogen and seemed to prevent mood plunges as well.

“If you think you’re at a higher risk of depression, you should proactively touch base with your doctor, says Schmidt. “Talk about what kind of symptoms you should be looking for and be concerned about as you age.”

He advises that you set up a plan for how to look for symptoms of depression. That way, you can enter midlife prepared to act. Schmidt encourages anyone who has a depressed mood to seek help from a primary care doctor or mental health professional.

The midlife transition is a phase of life that brings gradual changes. Many women don’t have problems during this transition.

You can make midlife your time for optimizing well-being by eating well, exercising, and getting quality sleep. The healthier you are at midlife, the more successful you’ll be combating age-related changes and diseases.

“We see it almost like a window of opportunity where people want to be entering midlife as healthy as possible,” Joffe says. “It’s really important for people to do the right thing now. And protect their health over time.”

Taking the Pedal Off the Metal

How to Live With Hot Flashes