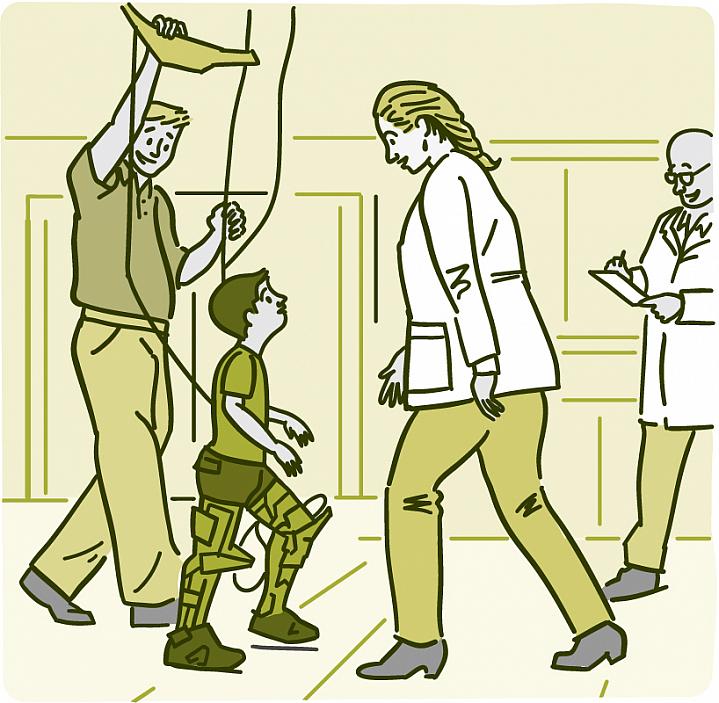 When you lose the use of a limb, even the simplest of daily tasks can turn into a challenge. High-tech devices can help restore independence. New technologies are even making it possible to connect the mind to an artificial limb. These artificial limbs are called bionic prosthetic devicesDevices that replace a body part..

“To get back some of that lost function, you need some sort of assistive tool or technology to either enhance recovery or restore the capability of the anatomy that’s missing now,” says Dr. Nick Langhals, who oversees NIH-supported prosthetic engineering research.

This fast-moving research aims to improve people’s lives by restoring both movement and feeling.

Newer, motorized hands are not as easy to learn how to use. To close the device, you contract the remaining muscles in your arm. An electrical sensor placed over those muscles detects the contraction and tells the hand to close. Since the original muscles that controlled the hand are gone, the remaining muscles must be retrained. Learning how to open and close a prosthetic hand in this way takes some time. And you still need to watch the device to know what it’s doing.

To make motorized hands more intuitive to use, researchers are developing ways to detect the electrical signals in your brain and nervesSpecial tissues that carry signals between your brain and other parts of your body. to help control advanced bionic prosthetics. This can be done many ways, such as by implanting tiny sensors in the parts of the brain that control movement or by attaching small electrodesTools that are used to carry electricity to or from different parts of the body. to the amputated nerves. Either way, the patients simply think about moving their hand and computers translate it into the movements of a bionic prosthetic hand.

“The most important thing about the research that we’re doing is this sense of wholeness,” says Dr. Paul Marasco, a biomedical engineering researcher at Cleveland Clinic.

Marasco’s team devised a similar system to restore the feeling of movement, too. The bionic hand sends signals to a computerized control system outside of the body. The computer then tells a small robot worn on the arm to send vibrations to the arm muscle. These vibrations deep in the muscle create an illusion of movement that tells the brain when the hand is closing or opening.

Marasco’s team tested this feedback system with several people who had a hand prosthesis. The study participants were able to operate the bionic hand and know what position it was in just as well as with their natural hand. With this feedback system, they didn’t have to look at the bionic hand to know when it was open or closed, or when it was reaching for an object.

“We fool their brains into believing that the prosthesis is actually part of their body,” Marasco says. This advancement directly taps into the way that the brain senses movement, which helps improve the two-way communication between prosthetic device and mind.

Research teams are also trying to help people who have lost the use of their legs. By wearing a robotic device called an exoskeleton, some people with leg paralysis have been able to regain the ability to walk.

A group led by Dr. Thomas Bulea, a biomedical engineer at the NIH Clinical Center, created a wearable exoskeleton for children with cerebral palsy. Cerebral palsy is a brain disorder that makes it hard to stand up straight, balance, and walk. The motorized, robotic exoskeleton changes the way the children walk by helping them straighten their knees at key points during the walking cycle. While the exoskeleton can make walking easier, children must be able to navigate at least small distances on their own to use it.

“The ultimate goal really is to have a person wear this outside of our lab, or even outside of the clinical setting,” Bulea explains. “To do that you have to have a really robust control system that makes sure that the robot is behaving properly in all different kinds of environments.”

The team is now writing software so that the robotic device can be worn while navigating bumps in the terrain and other real-world conditions.

“What I try to emphasize to people is that there are a lot of potential tools and technologies at our disposal to try and make people better, and they should explore them and consider embracing them,” Langhals says.

Many types of prosthetic devices are now in development. If you’d like to find a clinical study to help test one, you can search for one in clinicaltrials.gov, a database of both NIH-supported and other studies around the world.

If you’re interested in taking part in a study, talk with your doctor about the possible risks and benefits. See the Ask Your Doctor box for questions to ask.

If you’re interested in a clinical study for prosthetic devices, ask: