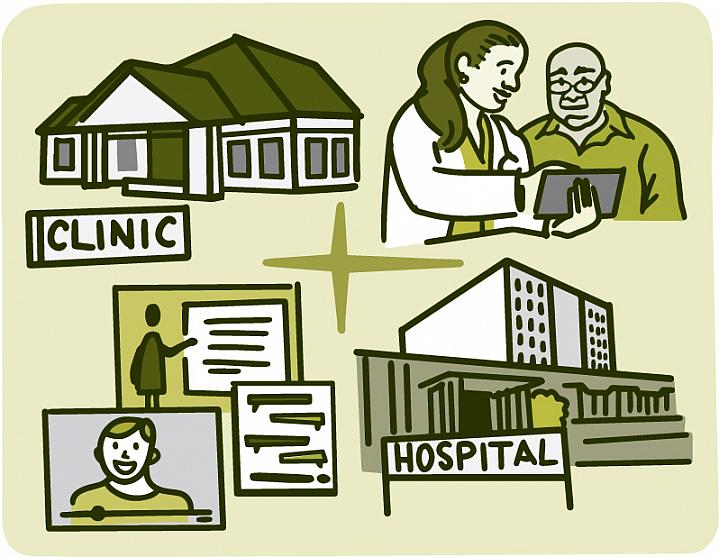 Differences in disease rates across the country are striking. People living in rural areas develop lung cancers more often than those in urban areas. African-American men are twice as likely as white men to die of prostate cancer. Hispanic women have the highest cervical cancer rates. Asian Americans have higher rates of liver cancer than others.

These are examples of health disparities: differences in access to health care, quality of health care, or health outcomes experienced by different populations.

“These can be based on ethnicity, gender, geography, or other things that put certain groups at a disadvantage,” says Dr. Olveen Carrasquillo, an expert in minority health at the University of Miami.

Many factors can lead to health disparities. These include socioeconomic factors, stress, physical and cultural environment, biological factors, diet, and behavior. NIH is funding research looking at ways to reduce health disparities. One area of focus is expanding access to cancer prevention and treatment.

People have a better chance of survival when doctors catch and treat cancer early. That’s why researchers are trying to bring cancer screening tests to people who might have difficulty accessing them. Screening tests are designed to detect conditions before you have symptoms.

Carrasquillo and his team are studying different ways to get cervical cancer screenings to women who can’t afford or access them. This screening is often done with a test called a Pap smear.

But a traditional Pap smear requires a trip to the doctor’s office. That can be hard for women who don’t have health insurance or who can’t get time off work, Carrasquillo says. Now, there are kits that allow you to do this screening at home.

“Many people know that they’re supposed to have a colonoscopy, but just can’t pay for it,” Carrasquillo says. His team hopes the home-based stool test will make colorectal cancer screenings accessible to more people.

Note that home-based screening tests are not right for everyone. Talk with your health care provider about what tests are best for you.

More than 13% of people living in the U.S. were born in another country. Many new immigrants face cultural barriers to health care, including language barriers. These can lead to health disparities.

For example, people in certain countries outside the U.S. are at higher risk of getting the hepatitis B virus. Hepatitis B is a blood-borne virus that can cause liver cancer. Early detection and close monitoring of the virus can help prevent it from damaging the liver and reduce the risk of liver cancer.

Language is one important barrier to regular monitoring for some Asian Americans. Ma’s team found that using a patient navigator could help recent immigrants get to their monitoring appointments. Patient navigators are people who speak the patient’s language and guide them through the health care system.

“It was very effective, but costly,” Ma says. Many doctors’ offices or hospitals don’t have the resources to hire a full-time navigator to help reduce disparities, she explains. Her team now has an NIH-funded project to create a “virtual navigator” using videos and text messages.

Videos can be translated into many different languages. This means they can reach more people. “We want to create something that can be used widely,” Ma says.

Clinical trials test how well new medical approaches work in people. But many clinical trials lack participation from diverse populations. People of different races, genders, ages, or from different regions, such as rural areas, can be underrepresented. For example, African-American adults are less likely than white adults to particpate in clinical trials.

“If we have studies that don’t include diverse populations then we can’t really speak to the benefit that those therapies would have in the populations that aren’t represented,” explains Dr. Chanita Hughes-Halbert from the Medical University of South Carolina.

Broad access to cancer clinical trials is important for many reasons, she says. “We want to make sure everyone can access new therapies for cancer treatment and participate as they’re being developed and tested for possible benefits.”

Hughes-Halbert helps run an NIH-funded program that lets people with cancer participate in clinical trials without having to travel to a large cancer center.

“This ensures that, if someone is going to their local cancer doctor, they’re able to have access to the same types of clinical trials and cancer care that are available at our cancer center,” Hughes-Halbert says. This can help reduce disparities caused by the inability to travel for treatment.

Hughes-Halbert’s team also studied using patient navigators to help people enroll in clinical trials. They found that 85% of people with cancer were willing to work with a navigator. Almost all of those who did participated in a clinical trial. The team is now designing a study to see if navigation can also help with preventive care, such as helping people quit smoking.

The challenges that contribute to health disparities can seem overwhelming. But there’s a lot you can do to reduce your risk of cancer. See the Wise Choices box for ideas and resources.