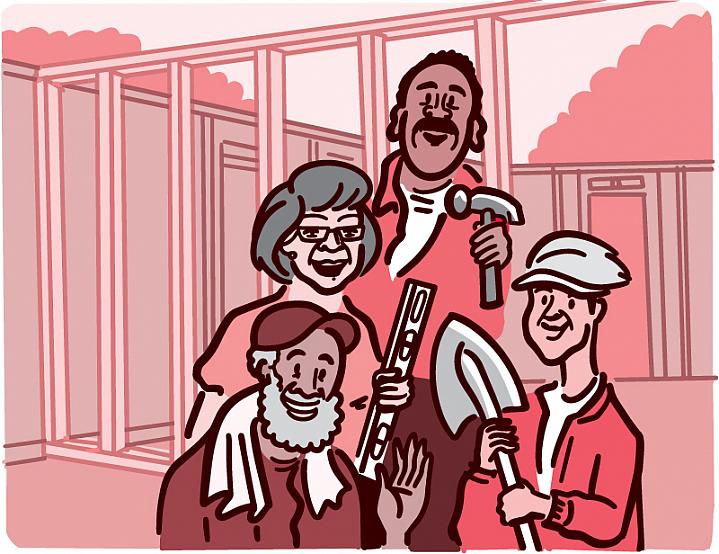 Getting older can bring many changes, both physically and mentally. Even when you’re healthy, your brain and body start slowing down. Maintaining your cognitive health—the ability to clearly think, learn, and remember—is important for your overall well-being.

Many things influence cognitive health. Your genes, lifestyle, and environment can all impact your thinking skills and ability to perform everyday tasks.

It’s common to experience some decline in cognitive function as you get older. That may mean occasionally losing things, forgetting words, or briefly forgetting what day it is. Or you may notice that it takes longer to learn new things. Such symptoms don’t necessarily mean that you’re developing Alzheimer’s disease or another type of dementia.

“I like to think about the brain as a computer disk for memory and thinking,” explains Dr. Marie Bernard, an aging expert at NIH. “As you get older it gets fuller and fuller. So, it can get more difficult to retrieve data and add data to it. But you’re still able to learn and grow.”

Aging is bound to bring changes. But there are many things you can do to protect your cognitive health as you age. That includes knowing what puts your well-being at risk.

It’s not only occasional memory problems that older adults are more likely to experience. Aging can bring other changes to the way the brain works. These changes can impact your ability to deal with complex social situations. That can put you at higher risk of being scammed.

Older adults are also more likely than younger ones to pick up the phone without knowing who’s calling, she explains. “Simply by doing that, you’re opening yourself up to a conversation with someone who may be an unscrupulous person trying to steal from you.”

Any adult can fall victim to these sorts of scams. But Boyle and her team recently found that low awareness of tactics used by scam artists may be an early indicator of worsening brain function.

In their study, people with low scam awareness were about twice as likely to later develop Alzheimer’s disease as those with high scam awareness.

People should verify any investment proposal or request for money before acting, Boyle explains. Trusted family members or friends may be able to help with this. “Take the time to look into financial propositions and make sure they are legitimate,” she says.

Many things can cause memory or other thinking problems. Depression, anxiety, an infection, or even certain medications can cause cognitive changes. Sometimes these types of issues can be resolved with treatment.

If you experience a sudden change in thinking, memory, or mood, it may be caused by a new medication. Some drugs may not cause cognitive changes when taken on their own but can do so when combined with other medications. Even common supplements or over-the-counter remedies can cause these types of interactions.

Sometimes, if you have more than one doctor, one might not know what the others prescribed. “Older adults really benefit from having a list of all their over-the-counter, herbal, and prescribed medications with them whenever they see a health care professional,” says Bernard.

Certain medications can also have dangerous, or even deadly, effects when combined with alcohol. And alcohol alone poses risks for the older brain. It can take less alcohol to alter judgment, coordination, balance, or sleep patterns in an older adult.

Dangerous drinking habits have been rising among older adults in the U.S. A recent NIH-funded study found that 1 in 10 Americans aged 65 or older binge drinks regularly. That means drinking four or more drinks on the same occasion for women and five or more for men.

Older adults may change their drinking habits to cope with the death of a partner or other loved one, or because they’re lonely. But drinking can also be part of social activities for older adults, explains Dr. Edith Sullivan, an alcohol researcher at Stanford University.

“Older adults might feel that ‘well, I’m old now, it’s OK for me to drink,” Sullivan says. But older brains and bodies are especially vulnerable to the effects of alcohol, she adds.

A recent study by Sullivan and her team used brain imaging to see how alcohol affects the brain. They found that older adults who misused alcohol had greater loss of brain tissue compared with their peers who didn’t drink. This was true even if they started misusing alcohol later in life.

The good news, she explains, is that some problems with thinking or memory caused by medications or alcohol misuse can be reversed. “That’s different from classical dementia, which is a one-way street of decline,” says Sullivan.

There are many things you can do to protect your brain as you age. “Cognitive activity, physical activity, and social engagement are associated with better cognitive functioning in older adulthood,” Boyle explains.

Managing your health conditions is also important. Controlling your blood pressure, for example, reduces the risk of having a small stroke (bleeding from blood vessels in the brain). Small strokes can cause temporary or permanent cognitive problems.

Feeling a sense of purpose in one’s life also seems to help protect older adults from cognitive decline. A study from Boyle and her colleagues found that people who felt more purpose in life had fewer symptoms from brain changes linked to Alzheimer’s disease.

“The aging brain can accumulate Alzheimer’s changes, but if you’re stimulating your brain and strengthening it like a muscle, you may be better able to tolerate those changes,” she says.

Bernard stresses that getting older can also bring cognitive advantages you might not know about.

“Think about the positive things that come with aging,” Bernard says. “It’s a great time to become engaged in meaningful activities, maintain connections to friends and family, develop new connections, and be physically active. And in turn, all of these things can enhance one’s quality of life and one’s aging.”

Good overall health can help you maintain your brain health. These tips can help you stay active and healthier physically and mentally: