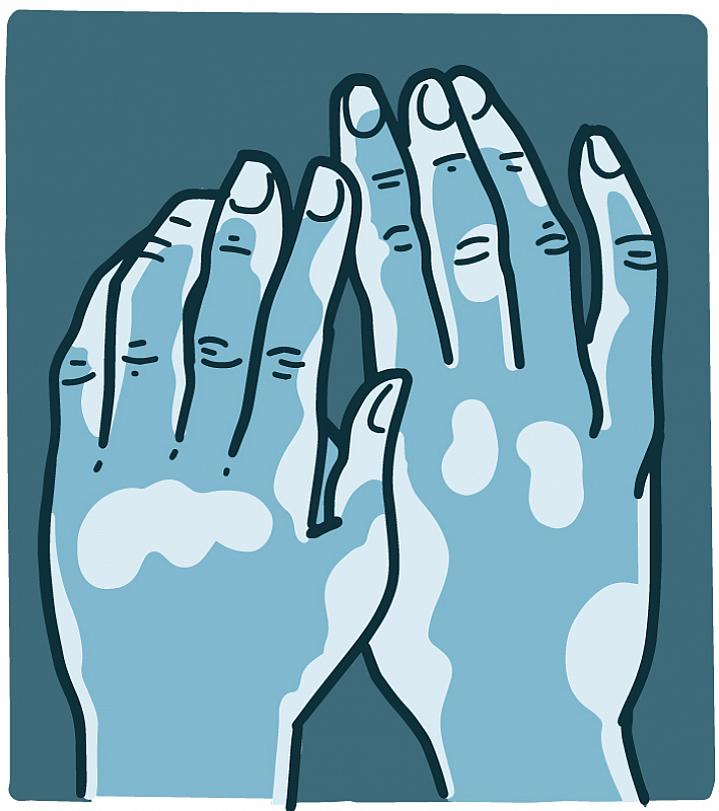 Your skin is often the first thing other people see. You may have noticed that some people have patches of white skin. This discoloring is called vitiligo.

Vitiligo isn’t contagious. It’s an autoimmune disease. That’s a condition in which the body’s immune system mistakenly attacks and destroys the body’s own cells.

Normally, your immune system defends your body from germs. But in vitiligo, immune cells kill the cells that produce the skin’s color. These pigment cells are called melanocytes.

Sometimes, vitiligo causes areas of hair to go white as well. People with vitiligo may also develop inflammationHeat, swelling, and redness caused by the body’s protective response to injury or infection. in the eyes or ears. These parts of the body also contain melanocytes.

To diagnose vitiligo, your doctor will look closely at your skin. They may use a special type of light that makes spots of vitiligo look chalky. You might also have a skin sample taken to look for pigment cells.

The condition isn’t painful. But some people experience itching while the skin is losing color, explains Dr. John Harris, a skin expert at the University of Massachusetts.

Some people feel distressed at the loss of their skin’s color. They may develop low self-esteem or a poor self-image from concerns about their appearance.

“Vitiligo can cause a reduction in quality of life, because it tends to involve parts of the body that can’t be hidden,” says Harris. But treatments are available. And special makeup can help hide the discoloring.

Some treatments aim to slow or stop the disease from getting worse. Others may restore the skin’s color. But these can take time to work. And some areas of the body are easier to treat than others.

A type of light therapy called UVB phototherapy is commonly used to treat the disorder. It uses special lamps that encourage the pigment cells in your skin to regrow.

Light therapy works better on some parts of the body than others. For example, it rarely works well on the hands, Harris says, “but the face is the easiest to treat.”

Some people may need medications that suppress the immune system. These can be given as skin creams or pills.

If someone stops treatment, vitiligo comes back, Harris explains. His team is looking for ways to make the immune system “forget” the melanocytes. That would prevent it from attacking them.

Drugs that suppress the immune system “are like cutting the power to the house to turn off the light in your bedroom,” says Harris. “We want to create more targeted therapies.”

In severe cases of vitiligo, surgery or bleaching larger areas of the skin to match the white patches may be options. Talk with your health care provider about what steps you can take to help with the condition. See the Wise Choices box for tips on living with vitiligo.