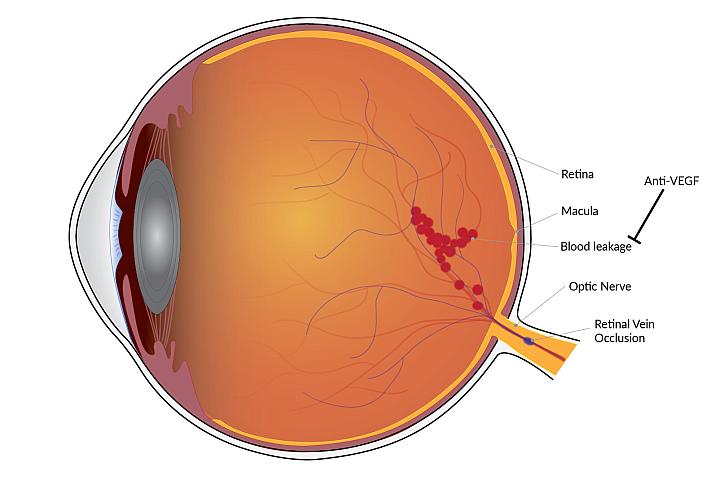 Blockages (occlusions) of the retinal veins can lead to blood vessel leakage in the retina. NEI

Fluid buildup at the back of the eye can cause swelling and leaky blood vessels. This is called macular edema. If left untreated, it can lead to blurred vision and eventually blindness. Retinal vein occlusions are one cause of it. These are blockages in veins in the retina (the light-sensing tissue in the back of your eye). A new study showed that treating blockages brings long-lasting benefits.

The study compared two drugs: aflibercept (Eylea) and bevacizumab (Avastin). Both block a family of molecules called VEGFs. VEGFs are released when blood flow is disrupted, leading to macular edema.

Researchers treated 330 people with macular edema caused by severe retinal vein blockages. Participants received an injection with an anti-VEGF drug once a month for at least six months. After one year, participants continued treatments at their doctor’s discretion.

The research team assessed participants five years after their initial treatment. They found that most doctors reduced the frequency of injections after 12 months. Some switched their patients to the other anti-VEGF drug. After five years, many showed improvement in the sharpness of their vision compared with the start of the study. Both drugs had similar results.

“This five-year study tells us a lot about what’s happening with retinal vein occlusion patients in the real world,” says Dr. Ingrid U. Scott of Penn State University. “It also underscores the importance of disease monitoring and individualized treatment to achieve the best possible vision.”