When Drinking Becomes a Problem 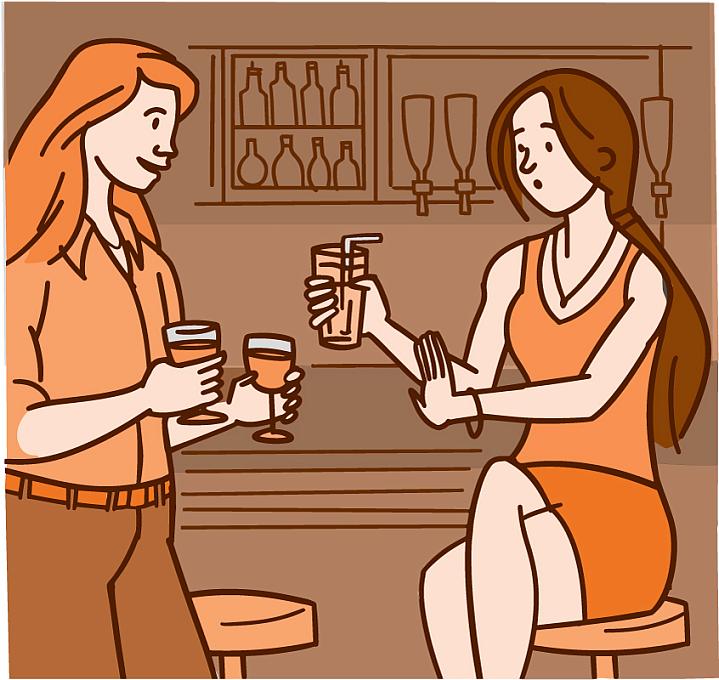 For some people, a glass of wine, a beer, or a cocktail is an occasional treat. Others struggle to stop at just one or even many drinks. Some may drink alcohol in moderation, but still feel like they’re not in control of their drinking. How do you know if alcohol has become a problem for you?

Some people should avoid alcohol completely. These include pregnant women and people who take certain medications. For most adults, experts recommend men limit alcohol to no more than two drinks per day, and women to no more than one drink per day. Drinking less is better for your health than drinking more.

“And you aren’t supposed to save those up and drink them all on a Saturday night,” says Dr. George Koob, director of NIH’s National Institute on Alcohol Abuse and Alcoholism. This type of drinking, called binge drinking, is especially dangerous. Binge drinking is when you have five or more drinks within a few hours for men, and four or more for women. Examples of a standard drink size are a 12-ounce glass of beer, a 5-ounce glass of wine, or 1.5 ounces of hard liquor.

Binge drinking can lead to blackouts or even deadly overdoses. Heavy drinking in general can cause many health problems. These include liver disease, heart and lung problems, and muscle and bone weakness.

There has been some recent good news about drinking in the U.S. “We’ve seen a steady decline in underage drinking,” Koob says. “And deaths associated with driving while intoxicated have, overall, gone down.”

But there’s also bad news. Over the last two decades, deaths involving alcohol use have more than doubled. The biggest increase has been for women.

The COVID-19 pandemic may have made things worse. “Quite a few studies indicate that people tried to cope with the stress of the pandemic by drinking,” says Koob. “And there were stressors all over the place. Isolation. Loss of jobs. Worry about getting sick. And, for women in particular, increases in responsibilities at home.”

Alcohol use disorder is when you can’t stop or control your alcohol use despite damage to your work, health, or personal life. This doesn’t look the same for everyone. It’s a complex disorder and can be mild, moderate, or severe.

“Alcohol use disorder is not caused by a single thing,” says Dr. Robert Messing, who studies alcohol and the brain at the University of Texas. “Different people can have different combinations of symptoms.”

It helps to know what symptoms to look for so you can make changes to your drinking habits early (see the Wise Choices box on next page for a list). If alcohol is causing problems in your life, many effective therapies are available.

Talk therapies, like cognitive behavioral therapy, can help you learn your triggers for drinking and ways to manage them. Peer groups can provide you with support through your recovery.

“And there are very good, safe medications,” says Dr. Nancy Diazgranados, who treats people with alcohol use disorder at the NIH Clinical Center. “They take away the cravings, or the desire or need for that next drink. That makes it easier to quit because you’re not thinking about that next drink all day.” These non-addictive medications can be prescribed by a physician.

Some people may benefit from family counseling to help repair relationships damaged by alcohol use, Diazgranados says. Other types of therapy, such as recreational and vocational therapy, teach people how to avoid alcohol in their personal and work lives. You have a better chance of recovery when you use many of the different treatments at the same time, she says.

You may not succeed the first time you try to quit or cut back on drinking. Relapse is common in alcohol use disorder. “If you have a slip every once in a while, we still consider you to be in at least the early stages of recovery,” Koob says.

It can take many tries to regain control of your alcohol use. That’s because alcohol can actually change your brain. Researchers are trying to better understand those changes and how to reverse them.

“We want to know how brain functions are affected by drinking,” she explains. They’re using brain scans to look at alcohol’s effects on different brain areas. Those areas could then potentially be targeted with new treatments.

Messing’s lab is looking at ways to change the brain’s responses to alcohol, too. They’re especially interested in the brain’s inflammationHeat, swelling, and redness caused by the body’s protective response to injury or infection. response.

“Hangovers are made better by anti-inflammatory drugs, like aspirin,” explains Messing. “That’s probably an indicator that inflammation is caused by heavy drinking.”

His team is looking into whether that increased inflammation triggers brain activity that then causes people to drink more—and how to prevent that with medication.

Understanding how alcohol changes the brain could lead to new ways to prevent and treat addiction. But for now, if you’re struggling with alcohol, talk with someone you trust.

“Seek help, whether it’s from your health care provider, or a pastor, or a friend,” says Diazgranados. “There’s always someone willing to help you through treatment.”

What’s Your Relationship with Alcohol?

If you answer “yes” to two or more of these questions, talk with your health care provider about alcohol use disorder. In the past year, have you: