Salt, Blood Pressure, and Your Health 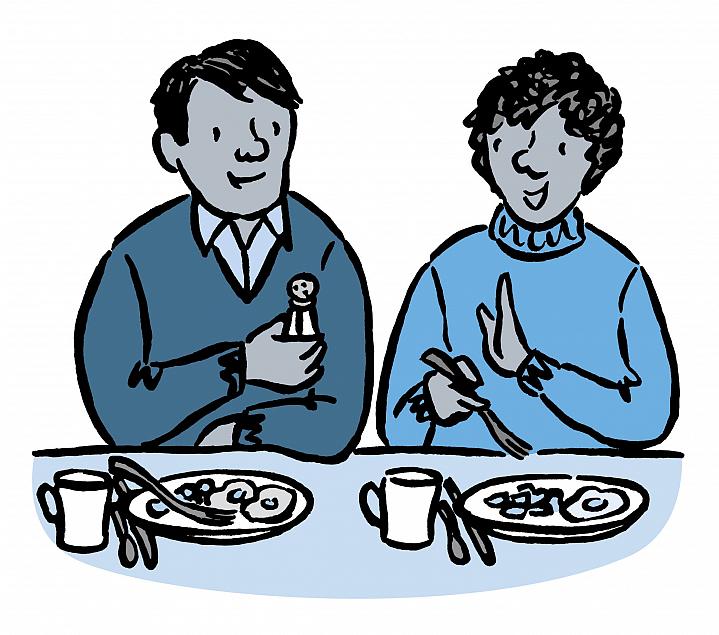 Salt is essential to our body’s fluids. That’s likely why we evolved to enjoy its taste. On the other hand, anyone who’s gotten a mouth full of seawater knows that too much salt tastes terrible. Maybe your body’s trying to tell you something. It turns out that too much salt can lead to a host of health problems.

Dietary salt, or table salt, is made from two chemical elements: sodium and chloride. That’s why its chemical name is sodium chloride. It’s the sodium part that’s been tied to health problems. But since most of the sodium we ingest is from salt, it’s difficult to separate the effects of salt and sodium in many studies.

“The best-known effect of sodium on health is the relationship between sodium and blood pressure,” explains Dr. Holly Nicastro, an NIH nutrition research expert. Dozens of studies, in both animals and people, have linked a higher salt intake with higher blood pressure. Reducing salt intake, on the other hand, lowers blood pressure.

Blood pressure is the force of blood pushing against the walls of arteriesThe vessels that carry blood from your heart throughout your body. as the heart pumps out blood. When this pressure rises—a condition called high blood pressure, or hypertension—it can damage the body in many ways over time. High blood pressure has been linked to heart disease, strokeWhen normal blood flow to the brain is stopped, usually by ruptured or blocked blood vessels., kidney failure, and other health problems.

Researchers do know that not everyone is equally sensitive to salt. “From our experiments, we know there’s lots of variation in the blood pressure response to sodium intake,” Nicastro says. Certain groups of people see greater reductions in blood pressure when they lower their salt intake: African-Americans, older adults, and people with blood pressure above normal.

“Within those groups, there’s a lot of variation between people,” Nicastro says. But about 1 in 3 adults nationwide has high blood pressure right now. Another third have elevated blood pressure, meaning their numbers are high enough to put them at risk to develop high blood pressure. In light of this, she says, “It’s really important for the majority of U.S. adults to reduce their blood pressure.”

Experts recommend that adults take in less than 2,300 milligrams (mg) of sodium a day—that’s what’s in about 6 grams of salt, or about a teaspoon. People with high blood pressure should shoot for 1,500 mg. But right now, American adults eat an average of about 3,600 mg of sodium per day.

Dr. Kirsten Bibbins-Domingo at the University of California, San Francisco, led an NIH-funded study that used computer modeling to explore the effects of a modest reduction in salt intake in the United States. The researchers found that reducing salt intake by 3 grams per day (1,200 mg of sodium) could cut the number of new cases of heart disease each year by as many as 120,000, stroke by 66,000, and heart attack by nearly 100,000. It could also prevent up to 92,000 deaths each year.

All segments of the population would benefit, with African-Americans having the greatest improvements overall. Women would particularly benefit from reductions in stroke, older adults from a decline in heart disease, and younger adults from fewer deaths.

Some countries have tried to lower salt intake using various strategies, such as working with industry to reduce the salt content in processed foods, requiring labels on ready-to-eat foods, and educating the public. The UK achieved a 15% reduction in salt consumption between 2003 and 2011. During this time, deaths from stroke fell by 42% and from heart disease by 40%.

But wouldn’t we miss the taste? “Several studies have shown that as you gradually reduce sodium intake, you lessen your desire for salty food,” Nicastro says. And surveys of people across the UK found that most people didn’t notice any difference in the taste of their food.

“A very modest decrease in the amount of salt, hardly detectable in the taste of food, can have dramatic health benefits for the U.S.,” Bibbins-Domingo stresses.

The salt we add to our food actually accounts for about 10% of our salt consumption. Most of the salt we eat comes in processed foods from stores, restaurants, and dining halls. You may already know that fast food, cold cuts, and canned foods tend to have a lot of salt.

“Many people don’t realize that a lot of our salt is from breads and cereals,” Bibbins-Domingo says. Studies have found that about 15 to 20% of the sodium in the average American’s diet comes from grain products, such as breads, cereals, crackers, and chips.

“In terms of advice, I think the best guidance we have is for people to pay attention to nutrition facts on the labels,” Nicastro says. “The percent daily value is a better guide than the language that’s used on food labels like ‘low-salt.’ These labels can be confusing, because they have very defined technical meanings.” Try to select foods, she advises, with less than 5% of the daily value of salt per serving.

Even small salt reductions can affect your blood pressure. If you can’t find a low-salt alternative to a particular food, it still helps to pick something that’s lower than what you’re already consuming.

“You can find remarkable variation in the amount of salt across major brands of food,” Bibbins-Domingo says. “Even without choosing something labeled ‘low sodium,’ you can often find a lower-sodium alternative.”

Beyond salt, a healthy eating plan can help keep your blood pressure under control. Check out NIH's Dietary Approaches to Stop Hypertension (DASH) eating plan. Other lifestyle measures can help you keep your blood pressure down, too. Lose weight if you’re overweight or obese. Get regular physical activity. Quit smoking. Manage your stress. The more of these steps you take, the more likely you’ll be to avoid related health problems.

Why not start now? Make small changes at first, and then keep working to gradually lower your family’s salt intake.

Do Detox Diets and Cleanses Work?

Cut Back on Sodium