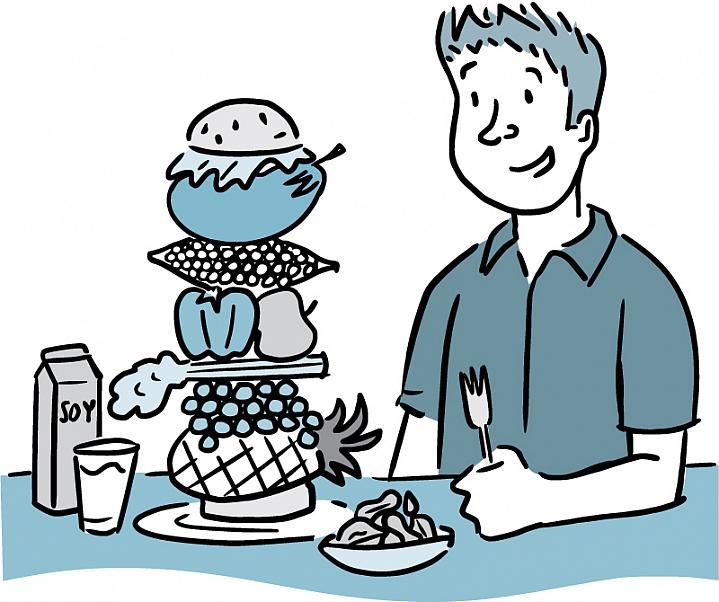 Vegetarians miss out on lots of foods. No grilled burgers or franks at picnics. No holiday turkey or fries cooked in animal fat. Strict vegetarians may even forego honey made by bees. But vegetarians also tend to miss out on major health problems that plague many Americans. They generally live longer than the rest of us, and they’re more likely to bypass heart-related and other ailments.

The fact is, eating a more plant-based diet can boost your health, whether you’re a vegetarian or not.

What is it about the vegetarian lifestyle that can protect your health? And are there risks to being vegetarian? NIH-funded researchers are looking for answers. They’re exploring the many ways that diet and other factors affect our health.

Vegetarian meals focus on fruits and vegetables, dried beans, whole grains, seeds and nuts. By some estimates, about 2% of the U.S. adult population follows this type of diet.

People have many reasons for becoming vegetarians. Some want to eat more healthy foods. Others have religious or economic reasons or are concerned about animal welfare. “Vegetarian diets are also more sustainable and environmentally sound than diets that rely heavily on meat, poultry and fish,” says NIH nutritionist Dr. Susan Krebs-Smith, who monitors trends in cancer risk factors.

Most people think of vegetarian diets as simply eating plant foods and not eating meat, poultry and fish. “But in fact, there are many different types of vegetarian diets,” Krebs-Smith explains. “Some are more restrictive than others.”

Some vegetarians eat fish but not meat or poultry. They’re called pescatarians (pesce is Italian for fish).

“Then there are the so-called flexitarians, or semi-vegetarians. These are people who eat a mostly vegetarian diet, but they occasionally eat meat,” says Jody Engel, a nutritionist and registered dietitian at NIH. “They might say ‘I’m a vegetarian, but I need to eat my burgers every Sunday.’  People tend to follow their own rules, which is one reason why it’s hard for researchers to study vegetarians. There’s so much variance.”

Despite the different definitions, “there’s tremendous agreement among nutrition experts and health organizations that a more plant-based diet is beneficial, whether you’re a true vegetarian or not,” says Krebs-Smith. “Most Americans don’t eat enough fruit, vegetables, legumes or whole grains. There’s a huge consensus that eating more of these foods would be a good idea for everyone.”

In some cases, though, it’s unclear if certain health benefits come from plant-based eating or from the healthy lifestyle of most vegetarians. “Vegetarians are generally more physically active and have healthier habits than non-vegetarians. They also typically have a higher socioeconomic status, at least in the United States,” says Krebs-Smith.

To tease out the effects of diet, scientists have to conduct large, carefully controlled studies that account for other factors. One of the world’s largest studies of plant-based diets is now underway at Loma Linda University in California. Cardiologist Dr. Gary Fraser is leading an NIH-funded team of scientists to analyze data on 96,000 Seventh-day Adventists in all 50 states and in Canada. Members of this religious group have unique dietary habits and a generally healthy lifestyle.

Adventists are encouraged to follow a vegetarian diet, but about half the population sometimes eats meat. These variable eating patterns allow scientists to compare a wide range of dietary habits and look for links between diet and disease.

To date, the researchers have found that the closer people are to being vegetarian, the lower their risk of diabetes, high blood pressure and metabolic syndrome (a condition that raises your risk for heart disease and stroke). “The trend is almost like a stepladder, with the lowest risks for the strict vegetarians, then moving up for the lacto vegetarians and then the pescatarians and then the non-vegetarians,” Fraser explains. Earlier studies found that vegetarian Adventists also tend to live longer than both meat-eating Adventists and non-Adventists. The vegetarians also have less coronary heart disease and lower rates of some cancers.

Because vegetarians by definition don’t eat meat, some people jump to the conclusion that simply cutting meat from your diet will lead to health benefits. “But it’s actually more complicated than that,” says Fraser. “Differences in life expectancy and other health matters might be related to the extra fruits, vegetables, nuts and legumes—including soy—that vegetarians tend to eat. You can’t necessarily conclude it’s based on the absence of meat,” he says.

Experts generally agree that vegetarians who eat a wide variety of foods can readily meet all their body’s needs for nutrients. “At any stage of life, you should be able to eat a healthy diet by consuming vegetarian foods. But it does take a little planning,” says Rachel Fisher, a registered dietitian involved in nutrition research at NIH.

Vegetarians need to be sure they take in enough iron, calcium, zinc and vitamin B12. Studies show that most vegetarians do get enough, in part because so many cereals, breads and other foods are fortified with these nutrients. “Vegans in particular need to be certain to get enough vitamin B12 and omega-3 fatty acids,” says Fisher. Omega-3—found in fish, flax seed, walnuts and canola oil—is important for heart health and vision.

Some vegetarians take dietary supplements to make sure they’re getting everything they need. It’s a good idea to talk to a registered dietitian or other health professional if you’re a vegetarian or thinking of becoming one.

Whether you’re a vegetarian or not, Fisher says, you can benefit from the high fiber, low fat and rich nutrients of a vegetarian diet. “Vegetarian foods can be so delicious, and they’re so good for you,” she says.

Try using a variety of spices and herbs to make things interesting. And make sure not to overcook your vegetables, or they might lose some of their valuable nutrients.

Tips for a Vegetarian Diet