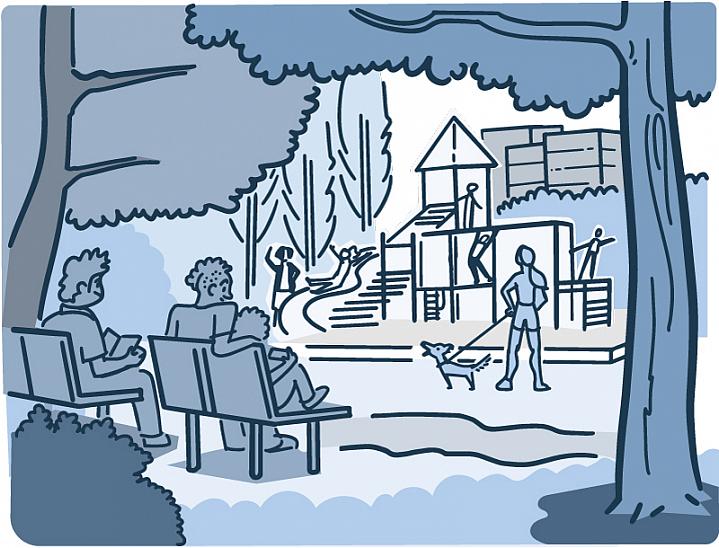 NIH-funded researchers are looking at how the environment around us, from how many trees we can see to how far we have to travel to get fresh food, influences our health.

Studies show that green spaces, such as parks or woods, seem to affect your health for the better. Dr. Francine Laden, an epidemiologist at the Harvard T.H. Chan School of Public Health, analyzed data from a huge national study to look at how green space affected people’s lives. She found that those who lived near green spaces were less likely to die over an 8-year period.

No one knows exactly why living close to green space has this effect. The plants themselves may be part of the reason. Plants pull pollutants out of the air and cool the neighborhood. Or it may be that green space creates a place to meet other people and help build social connections. Strong social ties have been linked to a longer life.

Simply being exposed to nature has been shown to improve mood, reduce anxiety, and enhance self-esteem. People who see greenery every day may have better mental health and be less stressed. Stress increases your risk of heart disease, diabetes, and other diseases.

In one NIH-funded study, researchers cleaned up vacant city lots and planted grass and trees. Other vacant lots in the same city were left alone. People who lived near the newly green lots said they felt less depressed and better about themselves after the change. In poorer neighborhoods, crime also fell near the green lots.

Living near a busy road can affect your health, too. Laden and her colleagues analyzed data on a group of women who were using in vitro fertilization to help get pregnant. The women who lived more than a quarter mile from a major road were more likely to eventually have a baby than those who lived within a few hundred feet of a major road.

Roads and highways are noisy to live near. Studies have found that noise can increase the risk of heart disease and depression. That may be because noise can cause stress or interrupt your sleep. People who live near a busy road may also breathe in more air pollution, which increases the risk of lung cancer, heart disease, and other conditions.

Your neighborhood can also affect how easy it is for you to exercise. People in urban and suburban areas can often walk to a coffee shop, school, or work. People in rural areas are more likely to have to drive to these places.

“The human body is meant to move. The body works a lot better when people are moving more,” says Dr. Ross Brownson, a public health expert at Washington University in St. Louis.

If you want to exercise more, Brownson says, figure out what kind of physical activity you enjoy and would be willing to stick with. Then look for opportunities. If you’re interested in walking but there’s nowhere safe to walk in your area, get together with other people and talk about how to bring about change, he says.

“We’ve seen this happen in a number of rural communities, where you build a coalition and you come together and say, ‘We need safer places for our kids to play and our residents to walk and spend time,’” Brownson says.

There are many ways to make walking in your neighborhood safer and easier, he says. For example, a walking trail could be built around a playground so that children could play while parents walked on the trail. Churches might donate land, or a trail could go around a ball field or along a creek.

In some neighborhoods, it’s not easy to get healthy food. The U.S. Department of Agriculture calls low-income communities without full-service supermarkets “food deserts.”

Food deserts can occur in both urban and rural areas. Food deserts not only lack grocery stores. They are likely to have stores selling cheap snacks that aren’t very nutritious.

People with chronic health conditions often get specific instructions from their doctors on what to eat. For example, people with high blood pressure are often told to follow the DASH diet, which emphasizes fruits, vegetables, and whole grains.

“It can be a struggle to follow such a diet if, in the community where you live, it is hard to access such foods,” says Dr. Deidra Crews, an expert on kidney disease at Johns Hopkins Medicine. “These may also be people who don’t have the financial means to travel outside of their community to access it.”

Crews’ team is testing whether giving healthy food directly to participants can help improve their health. They’re given $30 worth of fruits, vegetables, nuts, and beans every week, as well as advice on how to follow a healthy diet.

Farmers markets are one way to bring fruits and vegetables into neighborhoods without grocery stores. If you want to set up a farmers market in your community, ask if others would be interested. You may be able to get help from a community organization or from a local or state government.

“If people can get to them easily by foot, then even better; that’s an opportunity to get in some physical activity,” Crews adds.

Changing your neighborhood can be tough. It may mean getting together with neighbors and talking to local officials about making more walking paths, sidewalks, and bike lanes. You might reach out to local institutions, such as churches and schools, with land that could be used. You might talk to convenience store owners about offering more healthy foods.

“It doesn’t all have to be tackled at the same time,” says NIH health specialist and researcher Dr. Adelaida Rosario. “Anything that one community feels is relevant and important and that the majority of its citizens can benefit from—if people rally behind it, they can get it in their neighborhood.”

Looking for ways to make your neighborhood healthier?