The Skinny on Fat

The Good, the Bad, and the Unknown 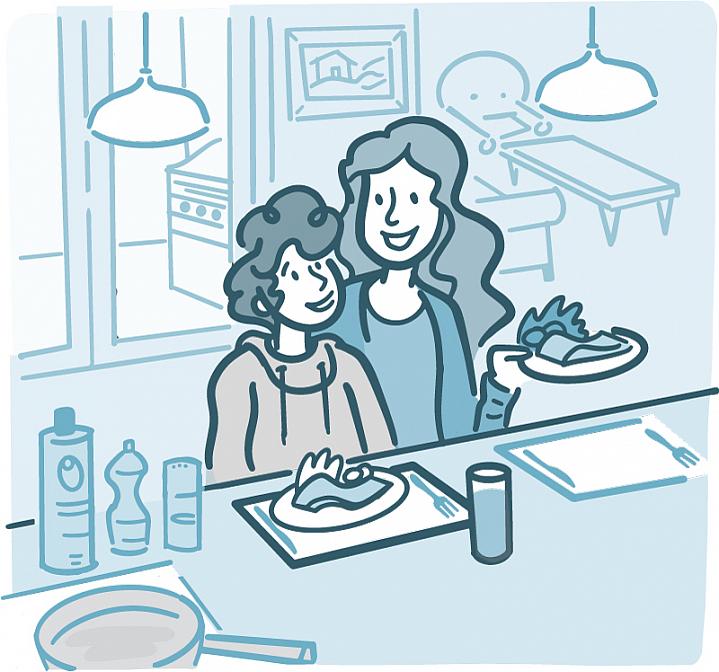 Fat is an essential nutrient for our bodies. It provides energy. It helps our guts absorb certain vitamins from foods. But what types of fat should you be eating? Are there any you should avoid?

Recommendations about dietary fat have shifted over the last two decades. From the 1970s through the 1990s, nutrition researchers emphasized eating a low-fat diet.

This was largely because of concerns about saturated fatsFats that are solid at room temperature; found in butter, lard, full-fat milk and yogurt, full-fat cheese, and high-fat meat., explains Dr. Alice H. Lichtenstein, who studies diet and heart health at Tufts University. Saturated fat that’s in the bloodstream raises the levels of LDL cholesterol—the “bad” cholesterol. This in turn raises the risk of heart disease.

But when people started following low-fat diets, they didn’t only cut saturated fats. In many cases, they replaced healthy unsaturated fatsFats that tend to be liquid at room temperature; found in vegetable oils, seafood, and nuts. with processed carbohydratesA class of food molecule that includes sugars, starches, and fibers., explains Lichtenstein.

“Initially, when we recommended cutting total fat we did not anticipate people would replace it with fat-free foods, like cookies, crackers, and ice cream, made with refined grains and sugar,’” says Lichtenstein. “It is what we refer to as an unanticipated consequence.”

“There’s still this misconception that eating fat—any kind of fat—is bad. That it will lead to heart attacks, or weight gain. That’s not true. People really should be encouraged to eat healthy fats,” says Dr. Frank Sacks, a nutrition expert at Harvard University.

Research has shown that unsaturated fats are good for you. These fats come mostly from plant sources. Cooking oils that are liquid at room temperature, such as canola, peanut, safflower, soybean, and olive oil, contain mostly unsaturated fat. Nuts, seeds, and avocados are also good sources. Fatty fish—such as salmon, sardines, and herring—are rich in unsaturated fats, too.

Large studies have found that replacing saturated fats in your diet with unsaturated fats can reduce your risk of heart disease by about the same amount as cholesterol-lowering drugs.

People should actively make unsaturated fats a part of their diet, Sacks says. You don’t need to avoid healthy fats to lose weight, he adds.

In an NIH-funded study Sacks led, called the POUNDS LOST trial, people who ate higher-fat or lower-fat diets had similar rates of weight loss. They were also both successful at keeping the weight off.

“Low-fat diets have the same effect on body weight gain or weight loss as higher-fat diets, or higher-protein diets,” he explains. “For weight loss, it’s about getting a handle on whatever foods in your diet are giving you excess calories.”

So are there fats you should avoid? Only a few years ago, doctors still had to advise people to avoid so-called trans fats in their diets. These largely manufactured fats could be found in things like margarine and many processed foods. They have been shown to raise the risk of heart disease.

Since 2015, the U.S. Food and Drug Administration has taken steps to remove artificial trans fats from the food supply. Most trans fats now in food come from the small amounts found naturally in animal products, like meat and butter.

Experts already recommend that people limit their intake of animal fats. “So that takes care of those trans fats as well,” Lichtenstein says.

Nutrition experts still recommend that people minimize the amount of saturated fat in the diet. But researchers are now looking at whether the type of food that saturated fat is found in matters. For example, the influence of plant-based saturated fats, such as those in coconut and palm oil, is still unclear and being researched further.

Recent studies suggest that some full-fat dairy products, such as yogurt, may actually have benefits for the heart, Krauss says.

Krauss and his colleagues recently ran a small study looking at the effects of replacing some of the sugar allowed in the DASH diet with saturated dairy fats. The DASH diet was developed by NIH to help lower blood pressure.

Participants who ate saturated dairy fat instead of sugar had less of a fat called triglycerides in their bloodstream. The higher-fat diet was also as effective at lowering blood pressure as the standard DASH diet.

More research is needed to understand which foods that contain saturated fats may influence the body in a good way.

Researchers know that there are big differences in how people’s bodies react to different types and amounts of fat. But they still don’t know why. Studies have found that genes aren’t likely responsible, Sacks explains.

Lichtenstein and Krauss are both studying how the microbes that live in the gut interact with dietary fats. The makeup of the microbiome—all the microorganisms that normally live in the body, mainly in the gut—can differ widely between people.

“We just don’t know yet, but there is tremendous interest in trying to understand the role of the gut microbiome in human health,” she says.

If there’s one thing that the research has shown, it’s that the science of diets is very complex. Experts have moved away from focusing on single nutrients—such as fat—by themselves. Instead, Sacks says, researchers now talk about healthy dietary patterns: ways of eating that take all aspects of the diet into account. Learn more about healthy dietary patterns at health.gov/dietaryguidelines.