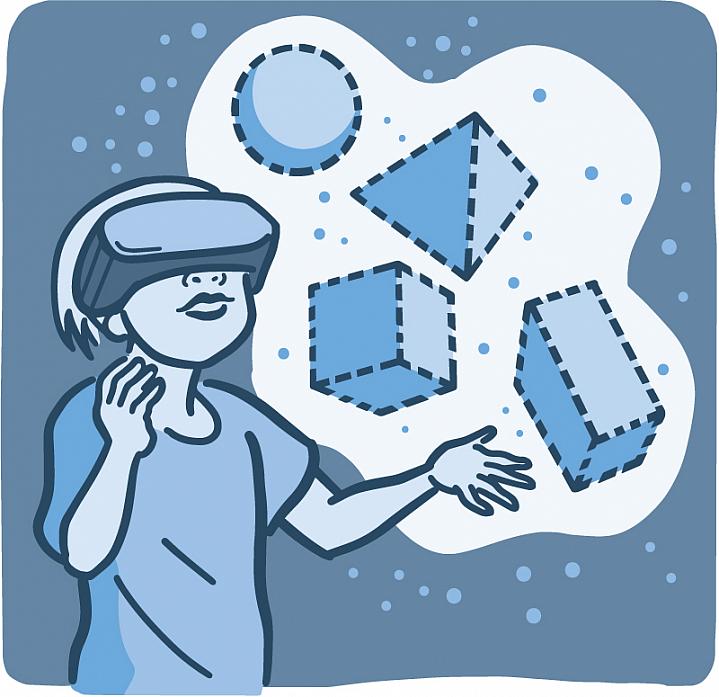 Virtual reality—often referred to as “VR”—used to be science fiction. Today, it’s everywhere. All you need is a smartphone and a headset to immerse yourself in 3-D virtual worlds or games. This booming technology may also be useful for health care and research.

“In the last few years, there’s been a huge expansion in the number of exciting clinical applications of virtual reality,” says Dr. Andrew Huberman, a VR researcher at Stanford University.

NIH-funded researchers are finding that VR may help with many areas of medicine. These include tailoring rehabilitation exercises, improving mental health, and reducing pain.

Scientists have been testing VR to treat movement problems. These can be caused by a stroke, a brain injury, Parkinson’s disease, or other conditions. Rehabilitation exercises can sometimes help people train their muscles to improve their movement. But these exercises can be boring—especially to kids.

“With VR, we can do things that are really hard to do in real-world therapy,” Bastian says. “If we want you to learn to reach and control your balance in one direction, we can make all the game components move things in that direction.”

VR can also help kids who have trouble following directions, she explains. “We can say something like, ‘just punch the red things.’ This can get them to do all kinds of complex tasks.”

Bastian is also developing VR exercises for adults who have damage to the cerebellum, the part of the brain that coordinates movement. This type of brain injury makes people’s movements jerky and uncoordinated.

The team is testing whether other parts of the brain can be taught to coordinate movements instead. But this can’t happen if the eyes can see the body, because the damaged cerebellum tries to take over.

That’s why her team is putting people into a VR scene where their bodies don’t exist. They must reach for targets with now-invisible limbs. Because the people can’t see their arms, other brain areas must take over to complete the task.

Coins fall from the virtual sky when the person makes a smooth movement to grab an object. This instant feedback for a successful movement is vital for the brain to forge new learning pathways, Bastian explains. “In VR, we can manipulate the environment in real time to help them learn to use another brain system.”

Huberman is using VR to test techniques to help people cope with fear and anxiety. VR is ideal for studying such mental states, he explains.

What you see can be easily manipulated using a virtual environment. His team is using this aspect of VR to help people learn to manage their fears.

VR can show people scenes of sharks or spiders, put them high on top of a building, or have them standing in front of a crowd to speak.

After their participants have one of these VR experiences, the team teaches them ways to manage their stress and discomfort. These include focused breathing exercises and other techniques.

The researchers then put people back into the stressful VR environment to see if the techniques can help them reduce their anxiety in the moment.

A unique advantage of VR, Huberman explains, is that researchers can directly measure signs of anxiety. These include changes in eye movements and pupil size.

The study is still in progress, but Huberman says the training seems to be helping people with their anxiety.

Dr. Sam Sharar, a pain expert at the University of Washington, uses VR to distract children and adults who are recovering from burns.

“Burn pain can be really, really bad. It’s hard to tolerate,” Sharar says. For burns to heal, the wounds must be washed and covered again every day. These procedures are very painful. Drugs that reduce pain often provide only partial relief for people with burn injuries.

Sharar believes VR can relieve pain by distracting the brain. “People have a fixed amount of conscious attention,” he says. “If you divert some of that from experiencing a painful procedure to another task, the brain experiences less pain. This happens even though the same pain signal is coming through the skin.”

His team and others developed a VR program that places people in a freezing cold virtual world. It engages their eyes and ears to block out what’s happening to their skin. It also has a game where people hit a target to distract more of their attention.

The team’s studies have shown that the immersive program reduced people’s pain during burn care by half compared with playing a regular video game.

Sharar and other researchers continue looking for ways to use virtual environments to provide more effective pain relief. For people with chronic pain, which lasts for more than three months, using VR distraction hasn’t been found to be helpful. His team and others are now using VR to expand access to techniques that have proven to help people manage chronic pain, like cognitive behavioral therapy (CBT).

“If VR could be used to deliver this type of therapy in an immersive, virtual environment,” Sharar says, “I think that would have tremendous potential to improve self-management of pain.”

VR continues to drop in cost and grow in popularity, Huberman adds. He thinks the feedback it can provide to the senses will also continue to improve. Such improvements could potentially open doors to its use in more areas of health care. See the Wise Choices boxes to learn more about NIH-funded studies testing VR.

NIH funds clinical trials that are testing virtual reality to help treat many conditions, including:

To find a trial in your area, talk with your doctor or visit ClinicalTrials.gov.