A Look Inside the Body 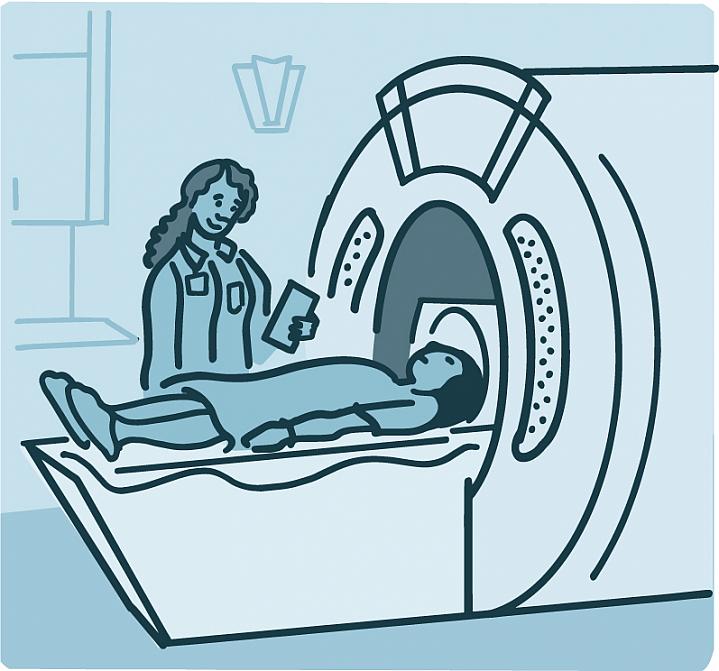 Have you ever had to get an X-ray, MRI, or other medical scan? Do you know what these tests involve? Or what they can do?

Medical scans help doctors diagnose everything from head trauma to foot pain. There are many different types of imaging technologies. Each works differently.

Some types of imaging tests use radiation. Others use sound waves, radio waves, or magnets. Learning about how medical scans work can help you feel more comfortable if you or a loved one needs one. It can also help you to know what to ask about before getting an imaging test.

The first revolution in seeing into the body came with X-rays. They have been used in the clinic for more than 120 years.

“X-rays are still used every day because they can do a lot,” says Dr. Kris Kandarpa, an imaging expert at NIH. They’re useful for looking at bones and finding problems in certain types of tissues, like pneumonia in the lungs.

X-ray imaging works by passing an energy beam through a part of your body. Your bones or other body parts will block some of the X-ray beams from passing through. That makes their shapes appear on the detectors used to capture the beams. The detector turns the X-rays into a digital image for a radiologistDoctor who specializes in creating and analyzing images of the inside
of the body. to look at.

X-ray beams use radiation. Radiation is energy that’s released as invisible particles or waves. Being exposed to very large amounts of radiation can damage cells and tissues. It may also increase your risk of developing cancer.

But modern X-ray tests use a very small dose of radiation. People are naturally exposed to radiation from many sources, such as the sky, rocks, and soil.

“A chest X-ray gives you similar amounts of radiation as you’d get in a plane flight across the Atlantic Ocean,” Kandarpa explains.

CT scans also use X-ray beams. But the beams rotate around your entire body to create a 3D picture. These images contain more information than a regular X-ray. The scan can be done in less than a minute. That makes it especially useful in places like the emergency department. There, doctors need to know immediately if a patient has a life-threatening condition.

Because CT scans use more X-ray beams than a normal X-ray, they often deliver a higher dose of radiation. But medical specialists have ways to calculate the smallest radiation dose needed, explains Dr. Cynthia McCollough, a CT imaging researcher at the Mayo Clinic.

“We tailor the dose to the patient’s size, and we tailor it to the reason for the exam,” McCollough says. For example, a CT scan of the chest needs less radiation than a CT scan of the stomach area.

McCollough’s lab, with four other NIH-funded teams, is working on ways to reduce the amount of radiation these scans deliver even more. Her team has used hundreds of CT scans to find the lowest radiation dose that’s needed for a radiologist to make the right diagnosis.

“We’ve found that when you take the dose way down, the images are less pretty, but they often still get doctors the right answer,” McCollough explains.

While lower doses of radiation would likely further lower risk, McCollough says that the standard doses are already quite low. That’s important for people to know, because “some patients who really need a CT scan are afraid to get it,” she says.

Fear can sometimes keep someone from getting a scan that could help improve their health, or even save their life. “Current CT doses are in a range where it’s not possible to even prove a risk exists. They’re that low,” she says.

If you’re concerned about a test that uses radiation, see questions you can “Ask Your Doctor” in the sidebox.

MRI works in a very different way. It doesn’t use X-rays. Instead, it uses strong magnets and radio waves to affect atoms in the water molecules within your body’s tissues. When the radio waves are turned off, the atoms release energy that’s detected by the MRI machine.

“MRI is most helpful when you want to look at diseases that involve soft tissue, such as muscles, tendons, and blood vessels,” explains Dr. Shreyas Vasanawala, an MRI researcher at Stanford University.

MRI can provide information about how the body is functioning in real time. “For example, we can measure how much blood is flowing in the vessels,” Vasanawala says. That can help doctors find small blockages or defects in the heart.

Because MRI doesn’t use X-rays, doctors would like to use it more in children. But MRI machines require you to lie motionless for a long time.

“It can be difficult for children to hold still,” says Vasanawala. If needed, general anesthesia can help get kids through the test. It makes them unconscious and unable to move. It’s typically very safe, but comes with some risks.

To help reduce the use of anesthesia, Vasanawala and his team have created a flexible, blanket-like version of MRI hardware to use with children. They coupled it with new methods for faster scanning. The soft blanket-like coil sits closely on top of the patient, providing a comforting environment. “It’s helping some kids get though exams without anesthesia,” he explains.

Another commonly used imaging method is called ultrasound. It sends sound waves into the body. Different types of tissue reflect sound waves differently. These differences can be picked up by an ultrasound machine and turned into a picture. Ultrasound is helpful for looking at the heart and other organs, or a developing baby.

Doctors also use tests called nuclear imaging. These tests use a tiny amount of a radioactive substance, or “tracer.” Most tracers are injected into the body, but some are inhaled or swallowed. The tracers inside the body release radiation that can be measured by a detector outside the body. The type of tracer differs depending on what the doctors want to see.

A positron emission tomography (PET) scan, for example, often uses a radioactive sugar to diagnose cancer. When cancer cells take up the radioactive sugar, they can be seen with the PET scanner.

Scientists are working to develop new types of tracers to detect different conditions, such as infections hiding deep in the body. They’re also continuing to explore other ways to make medical scans faster and deliver less radiation.

Before getting a medical scan, ask: