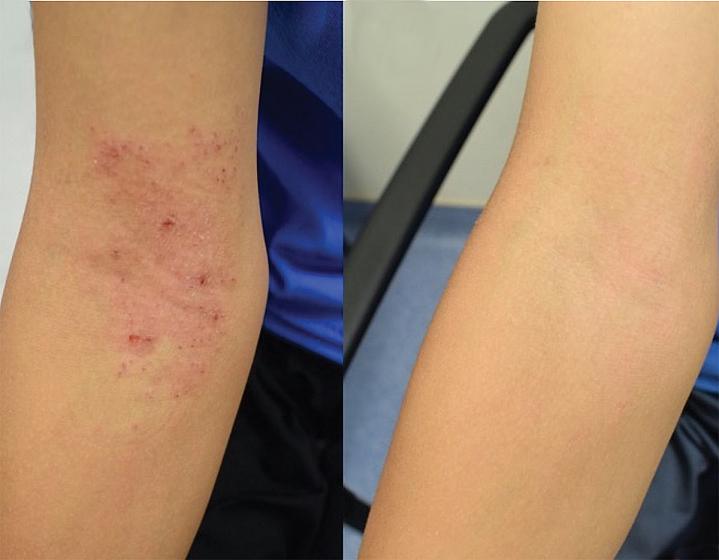 Inner elbow of a child with eczema before experimental therapy (left) and after four months of treatment (right). NIAID

Children with a skin disease called eczema benefited from an experimental treatment with live bacteria. The treatment improved skin symptoms in children as young as three years old.

Eczema can cause dry, itchy skin and rashes. Studies have shown that germs on the skin, like bacteria, may play a role in the condition. People with eczema often have a different balance of bacteria than those with healthy skin.

Researchers tested live bacteria as a treatment for eczema. They used bacteria found naturally on the skin called Roseomonas mucosa.

Twenty children were enrolled in the study. Their ages ranged from three to 16 years. A solution with the live bacteria was sprayed onto their skin where they had a patch of eczema. It was applied twice weekly for three months. Then, every other day for another month.

Almost all of the children showed more than 50% improvement in their symptoms after the treatment. Most needed less medicine to manage the condition. They also reported less itching and a better quality of life.

The scientists found improvements in the skin’s ability to seal in moisture. The treatment also helped keep out substances that can cause allergic reactions.

“Most children in the study experienced substantial improvements in their skin and overall wellbeing following R. mucosa therapy. Encouragingly, the bacteria stayed on the skin and continued to provide benefit after therapy stopped,” says NIH researcher Dr. Ian Myles, who led the study.

The treatment is now being further studied in a larger group of children, as well as adults.