Building and Boosting the Immune System 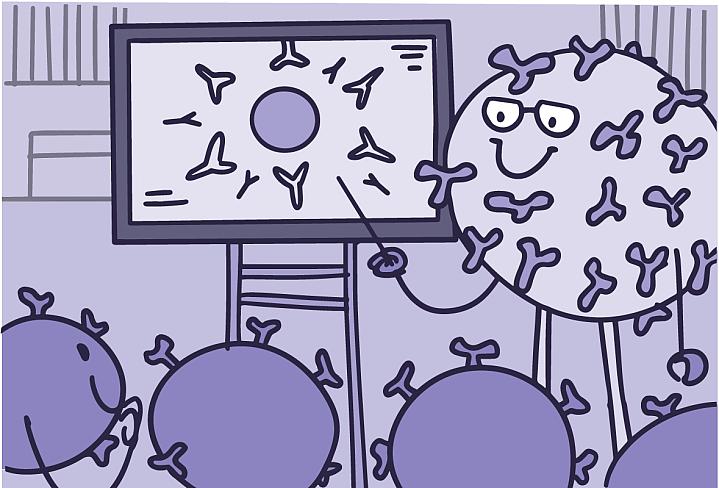 Every day while you eat, sleep, work, and play, battles are being fought throughout your body. You rarely feel it. But bacteria, viruses, and other microbes are constantly invading from the outside world.

Your body has a defense system for such invaders. It’s called the immune system. Your immune system is made up of trillions of cells and proteins. These are found in your blood and every organ of your body. The immune system learns and changes over your lifetime—even before birth.

You’re not born with a fully equipped immune system. Fetuses can produce some immune protection. But before birth, “the vast majority of protection against infection comes from the mother,” explains Dr. Whitney Harrington, who studies immune system development at Seattle Children’s Research Institute.

Germ-fighting molecules made by the immune system, called antibodies, are transferred to the fetus through the placenta. They can also be passed to the baby after birth through breastfeeding. Antibodies stick to germs and stop them from infecting cells.

“The peak risk of severe disease from many infections is under six months of life,” says Harrington. That’s because the baby’s immune system is just starting to develop.

Antibodies that are passed along from the mother can last for many months. They help protect a new baby until their immune system starts to develop.

The immune system builds many lines of defense. The cells of the innate immune system provide an early response to danger. They move through the body looking for signs of damage or infection of other cells. Then they destroy those cells.

Another major defense is called the adaptive immune system. It’s activated by signals from the innate immune system and the infectious germs and makes a powerful response. The cells of this system keep a long-term memory of the germs they fight. They also respond to vaccinations and make all your antibodies.

Researchers have found that, like antibodies, some adaptive immune cells also cross from the mother to the fetus. These cells may start teaching the fetus’s immune system about germs the mother has been exposed to.

Harrington and her team have been trying to learn more about these cells. They want to understand when this transfer happens and to use it to maximize immune protection provided by the mother.

Through infancy and childhood, your immune system matures and continues to build its own disease-fighting cells. Exposure to germs in child-hood helps the immune system grow stronger over time, Harrington says.

Protection as You Age

By the time you’ve reached young adulthood, you’ve been exposed to many germs. So your immune system is likely to have a strong response to many infections you encounter.

Vaccines further strengthen your defenses. Vaccines expose your immune system to dead or weakened germs, or just pieces of them. That helps your immune cells learn how to fight these threats and remember them without you getting sick.

Certain vaccines are recommended during pregnancy. These boost protection provided by the mother against deadly diseases during a baby’s first months of life. Vaccines are then recommended shortly after birth through adulthood.

Some vaccines require additional shots during adulthood to boost your immune system’s memory. And some people—depending on their health, job, or other factors—may need extra vaccines to keep them safe. Keep up with current vaccine recommendations.

But, like other systems in your body, the immune system can begin to decline as you age. These changes can prevent immune cells from working to the best of their ability.

Other parts of your body, such as the heart or lungs, can accumulate wear and tear with age, too. This reduced function puts older adults at greater risk for developing more severe disease from many infections.

Even a bit more damage from an infection can cause an older adult’s organs and tissues to not perform their jobs well, Germain says. That’s why certain vaccines are especially recommended for people over age 50.

Researchers are still learning how to improve immune responses and vaccines. Some microbes are very good at hiding from the immune system. Many avoid detection by mutating, or changing, so that previously exposed immune cells can no longer recognize them.

Dr. Shane Crotty at the La Jolla Institute for Immunology and his team are trying to take advantage of the body’s way of keeping up with these changes. They’re studying a part of the adaptive immune system called germinal centers. These are areas in the lymph nodesSmall bean-shaped structures that are part of the body’s immune system. They contain cells that help the body fight infection and disease. where immune cells go to develop and learn to produce more effective antibodies. Germinal centers form temporarily in response to infection or vaccination. They don’t just produce antibodies against the germs that are in your body. They also produce antibodies against different versions (variants) of those germs that you haven’t been exposed to. Cells in the germinal centers essentially guess at how the virus may change over time.

“Germinal centers are one of the most amazing things your immune system does,” says Crotty. Take the COVID vaccines as an example. The COVID vaccines developed against the original virus caused people to make antibodies that guarded against other variants.

“All the antibodies anybody developed against other variants from vaccination came from germinal centers,” Crotty explains.

Germinal centers can last in the body for up to six months. And the longer they’re around, the more varied the antibodies they produce.

Crotty and his team are testing if changing the way vaccines are given can help germinal centers last longer. Their recent study tested an experimental HIV vaccine in animals. Researchers gave the vaccine in many small doses over time. This produced antibodies that were more varied and lasted longer than those from the single large vaccine dose.

As researchers continue looking for new ways to protect you from disease, staying current on your vaccines and living a healthy lifestyle are the best ways to boost your defenses. See the Wise Choices box for tips.

How to Help Your Immune System