When Food Consumes You 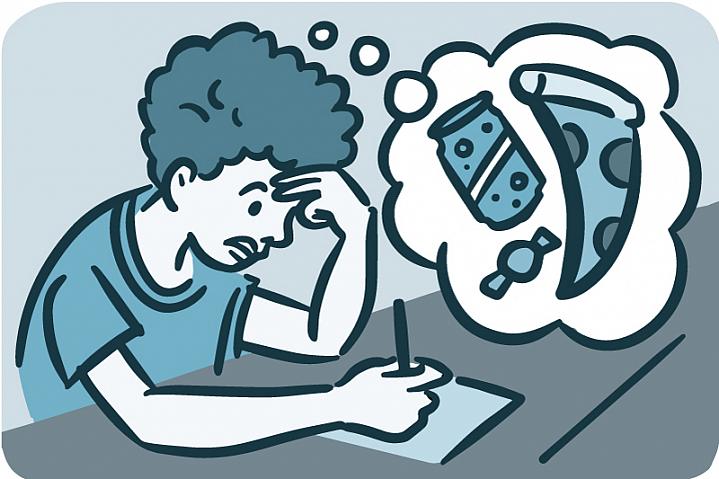 How do you feel after you eat? Satisfied? Too full? Or maybe even guilty? Being too focused on food can sometimes turn into an eating disorder.

People with eating disorders have severe, persistent, and unhealthy thoughts and behaviors about food. As a result, they might eat way too little or way too much.

Eating disorders are not a lifestyle choice. They are serious illnesses. They affect your body’s ability to get proper nutrition. This can lead to health issues, such as heart and kidney problems, or even death.

“Binge-eating is not just a lot of overeating,” explains Dr. Cynthia Bulik, an expert on eating disorders at the University of North Carolina at Chapel Hill. “There’s this sense of loss of control. You start eating and you feel like you just can’t stop.”

People with binge-eating disorder eat well beyond being full. They often eat until they feel very uncomfortable. Afterward, they’re usually overcome by feelings of guilt, shame, and distress. Eating too much too often can lead to weight gain and can be associated with obesity.

When binge-eating is followed by “purging,” it’s called bulimia nervosa. People with bulimia nervosa may follow binge-eating by vomiting or taking laxatives to purge, over-exercising, or fasting. They’re often able to maintain a normal weight because they compensate for the extra calories. But bulimia nervosa can cause other health issues, like heart irregularities or problems with the digestive system.

People with anorexia nervosa are on the other extreme. They eat very little. They may see themselves as overweight, even when they are dangerously underweight. It’s the least common of the three eating disorders, but is often the most deadly.

An eating disorder can develop for anyone, at any body weight or shape, and at any time. But they often start in the teen or young adult years.

“When young people show signs of an eating disorder, there is this tendency to think that they might outgrow it or that it’s just a phase,” Bulik says. “But the most likely path is in the direction of developing a full-blown eating disorder.”

What causes eating disorders isn’t known. Genes and family history, mental and emotional health, and environment and culture can all influence whether someone develops one of these complex conditions. Some NIH-funded researchers are studying possible genetic causes for eating disorders. Others are looking for changes in the brain. They hope their studies will help guide how eating disorders are diagnosed and treated.

Many people with eating disorders may not think they need treatment. So family members and friends can be very helpful. Express concern. Say you’re there to listen.

“If you’re concerned that you or a family member might have an eating disorder, the key is really to see a health professional with expertise in eating disorders for an evaluation,” Bulik says.

Treatment plans are tailored to individual needs. They may include talk therapy, nutritional counseling, and medications. With treatment, you can return to healthier eating habits and prevent serious complications.

You can’t tell by someone’s size if they have an eating disorder. But you can look for certain signs: