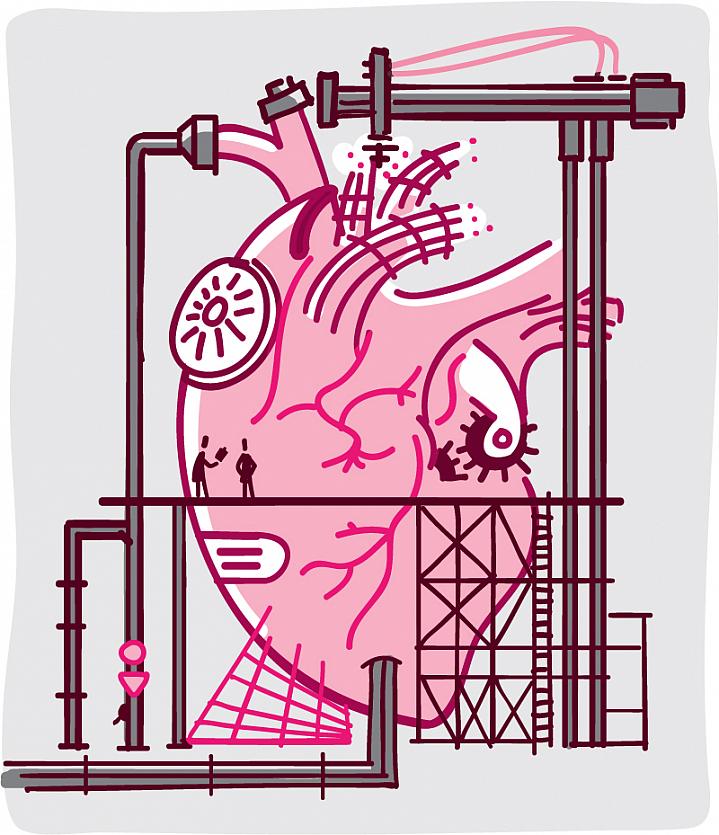 How can you mend a broken heart? Or repair a damaged liver, kidney, or knee? NIH-funded scientists are exploring innovative ways to fix faulty organs and tissues or even grow new ones. This type of research is called tissue engineering. Exciting advances continue to emerge in this fast-moving field.

Tissue engineering could allow doctors to repair or replace worn-out tissues and organs with living, working parts. Most important, tissue engineering might help some of the 120,000 people on the waitlist to receive donated kidneys, livers, or other organs.

Doctors have long used tissue-engineered skin to heal severe burns or other injuries. But most tissue engineering methods are still experimental. They’ve been tested only in laboratory dishes and sometimes in animals, but only a few new approaches have been tested in people. Several clinical studies (involving human volunteers) are in the early stages of testing newly developed tissues.

“With this approach, scientists are combining engineering and biology to restore a damaged organ or tissue, whether it’s been damaged by disease or injury or something else,” says Dr. Martha Lundberg, an NIH expert in heart-related tissue engineering.

Some scientists are creating special net-like structures, or scaffolds, in desired shapes and then coaxing cells to grow within them. Some use a mixture of natural substances called growth factors, which direct cells to grow and develop in certain ways.

“Other scientists are using different 3-D bioprinting technologies—some are like fancy inkjet printers—to create new tissues or organs,” Lundberg says. They’ve printed 3-D kidneys and other organs that look like the real thing. But while most of these printed body parts have the right shape, they’re not fully functional.

“Scientists haven’t yet figured out how to print an organ that includes the correct blood vessel patterns, nerve connections, and other components that come together in a mature organ,” Lundberg says. “When creating a new organ, if it can perform the right job and functions, it may not need to look like the real thing.”

Many tissue engineering methods use stem cellsImmature cells that have the potential to develop into many different cell types in the body., which can be nudged to turn into different cell types. One research team guided human stem cells to become a 3-D structure that can respond to light. The method might one day lead to new therapies for eye disorders. Other stem cell approaches may lead to improved treatment for spinal cord injuries, diabetes, and more.

Another approach, called decellularization, involves removing all the cells from an organ. What’s left behind is a thin, pale framework that contains the organ’s natural structural proteins, including the pathways for tiny blood vessels and nerves. By infusing new cells into this mesh-like matrix, some researchers have successfully created working animal kidneys, livers, hearts, lungs, and other organs.

The decellularization technique was used by Dr. Martin Yarmush and his colleagues to create a functional rat liver that included a network of working blood vessels. Yarmush is a biomedical engineer at Rutgers University and the Massachusetts General Hospital. The engineered livers his team created were kept alive in the laboratory for days and functioned for several hours after transplantation into rats. The researchers are now working to help those transplanted livers survive even longer. They’re also scaling up the methods to create a decellularized human liver that can be repopulated with functional cells.

“A parallel effort we are pursuing involves taking a donated organ that is not considered transplantable for a particular reason, and then using a reconditioning solution and perhaps even stem cells to revitalize the organ so it becomes transplantable,” Yarmush says.

Other researchers are working to repair damaged body parts that are still in the body. At the University of Washington in Seattle, Dr. Charles Murry and colleagues are searching for ways to fix injured hearts. One of their latest studies used human stem cells to repair damaged hearts in monkeys. The stem cells were coaxed to become early-stage heart cells, which were then infused near the heart injury.

The new cells made their way into the damaged heart muscle and organized into muscle fibers in all of the treated monkeys. The infused stem cells replaced nearly half of the damaged heart tissue and began beating in sync with the heart. Still, the scientists note they need years of research before this type of therapy might be tried in people.

Some methods are already being tested in humans. Dr. Martha Murray, a surgeon at Boston Children’s Hospital, is exploring new ways to heal a common knee injury known as a torn ACL (anterior cruciate ligamentTough, flexible tissue that connects bones to each other.). Athletes who do a lot of twisting and turning, as in basketball or soccer, are at risk for damaging the ACL.

“Typical treatment today, called ACL reconstruction, works well, and it gets patients back to the playing field at a relatively high rate,” Murray says. But the surgery involves removing a piece of tendon from elsewhere in the body and using that to replace the ACL. “So it involves making 2 injuries that the body has to heal from. And even with this treatment, patients still develop arthritis in the knee 15 to 20 years later,” Murray adds. “We wanted to find a better therapy—something less invasive.”

After testing several biomaterials, Murray’s team found that stitching a bioengineered sponge between the torn ends of an injured ACL allows blood to clot and collect around the damaged ligament. Because blood naturally contains stem cells and growth factors, the blood-soaked sponge acts as a “bridge” that encourages ACL healing. The sponge is made of some of the same proteins normally found in ligaments, and it dissolves after a few weeks.

Studies in large animals showed that the bioengineered sponge was much less likely to lead to arthritis, and it healed ACL injuries as well as standard reconstruction surgery. The U.S. Food and Drug Administration recently approved human safety testing of the sponge in 10 people with ACL injuries.

Metal, plastic, and other non-biological devices can also replace or enhance malfunctioning body parts. One promising possibility still in development is an artificial kidney that could be implanted in the body and used in place of dialysis to treat end-stage kidney disease. Scientists are also studying a synthetic glue modeled after a natural adhesive that might help to repair tissues in the body. You can learn more about these and other cutting-edge studies at www.nibib.nih.gov/science-education/bionic-man.

For Healthy Organs and Tissues

The kidney is the most transplanted organ in the U.S., followed by the liver, heart, and lungs. You can protect all of your body’s organs through healthy behaviors:

Consider signing up as an organ and tissue donor. For information, visit www.organdonor.gov/stateMap.asp. (HHS)