Marvels of Mucus and Phlegm

The Slime That Keeps You Healthy 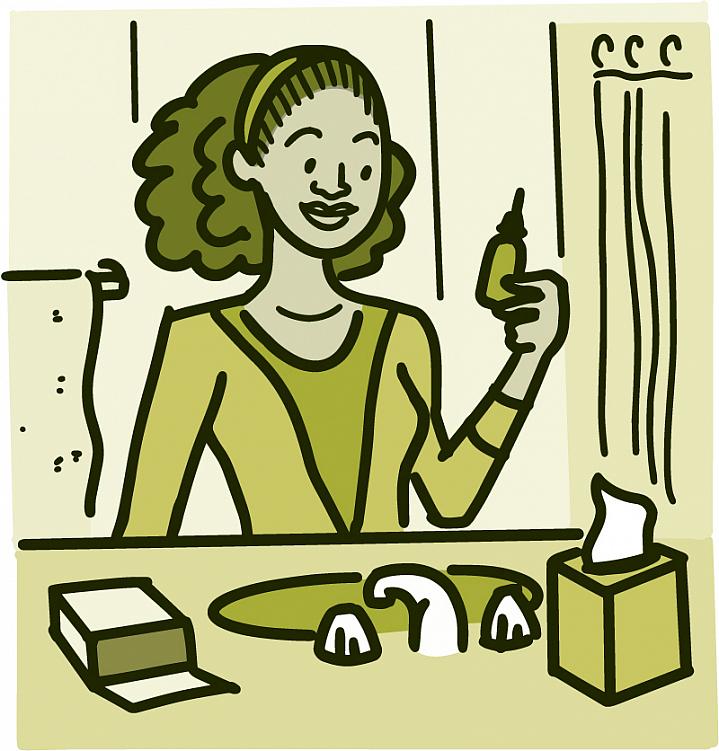 Mucus has several names. Snot, the sticky goo that pours from your nose during a cold. Or phlegm, the gunk that can clog your lungs and make you cough. You probably aren’t a fan of the stuff. But mucus is so much more than a runny nose. Your body is making mucus all the time. And it plays an important role in keeping you healthy.

“Mucus and phlegm get sort of a bad reputation,” says Dr. Richard Boucher, a lung expert at the University of North Carolina. “People think about it as something you’re supposed to cough up and get out. That it’s a bad thing. But in truth, mucus really is the interface between you and the outside world.”

Mucus lines the moist surfaces of your body like the lungs, sinusesThe hollow spaces in your skull around your nose, eyes, and forehead., mouth, stomach, and intestines. Even your eyes are coated with a thin layer of mucus. It serves as a lubricant to keep tissues from drying out. It’s also a line of defense.

“Mucus is very important for filtering out materials that you breathe in through your nose, such as dust and allergens and microorganisms,” says Dr. Andrew Lane, an ear, nose, and throat expert at Johns Hopkins University. “Anything that you breathe in gets stuck in the mucus, like flypaper.”

In the next hour, you’re going to inhale thousands of bacteria. But you’ll never know it. Bacteria land on the mucus-lined surface of the lungs and get trapped. Then little hairs called cilia go to work. They push the mucus up and out of the lungs with all the trapped bacteria, viruses, and dust.

“It comes up at sort of a nice slow rate to the back of the throat,” Boucher says. “And if you’re normal and healthy, you never feel it and you just swallow it.”

The mucus, together with the bacteria and other trapped substances, then goes to the stomach and eventually pass out of the body.

Your body makes a lot of mucus, although no one’s quite sure how much. Mucus is mostly water. But it also contains special proteins, sugars, and molecules that help the body control harmful germs.

Usually you’re not aware of all the mucus that slowly flows through your body. That is, until you get sick.

You usually only notice mucus when you’re making too much of it. Or if it changes consistency.

An infection can make mucus thicker and stickier. Infections also lead to inflammationHeat, swelling, and redness caused by the body’s protective response to injury or infection. in the mucous membranes that line the nose and the rest of your airway. This can cause certain airway glandsOrgans that produce and release substances into the body. to make more mucus. That mucus can get thick with bacteria and cells that arrive to fight the infection. That can stimulate even more mucus production.

“When mucus is particularly excessive, it can be bothersome in terms of runny nose, clogged nose, and post-nasal drip,” says Dr. Bruce Bochner, an allergy expert at Northwestern University. Post-nasal drip is when excess mucus from the back of the nose gathers and drips down the back of the throat. It’s a common cause of a cough.

Allergies can also cause your body to make extra mucus. When you have an allergy, your immune systemThe system that protects your body from invading viruses, bacteria, and other microscopic threats. overreacts to a harmless substance, like pollen, dust, or animal dander. Cells in your airway then release substances, like histamine.

Histamine can make you sneeze. It also causes the mucous membranes in the nose to swell and the glands to make more mucus. Bochner’s team studies how certain proteins on immune cells control allergies and inflammation. They’re also looking at how certain components of mucus might help fight inflammation.

“There are two general types of secretions that that are made in the nose,” Bochner explains. Things like allergies, eating spicy food, and being outside in the cold can result in a more watery nasal leakage.

Your body usually makes thicker mucus when you have a cold (caused by viruses) or sinus infection (caused by bacteria).

Most mucus problems are temporary. But producing too much mucus contributes to some serious conditions. This includes cystic fibrosis, a genetic disorder that causes mucus in the lungs to become thick and glue-like. Boucher and his colleagues are working to find new treatments for cystic fibrosis and related lung diseases.

Mucus can come in a range of colors. This won’t surprise you if you’ve ever looked closely at your tissues after blowing your nose.

Mucus is normally clear. During a cold, you may find that your snot is cloudy or yellowish. Proteins released by the cells that cause inflammation can get stuck in the mucus and give it this color, Lane explains. He’s currently studying how cells in the nose and sinus are involved in long-term inflammation, called chronic sinusitis.

Brown or black mucus is more common in heavy smokers and some types of lung disease. Greenish, brownish, or bloody colors may signal a bacterial infection.

But that’s not always the case. It can be difficult to figure out what’s wrong simply by your mucus color. Since many things can cause your body to make too much mucus, doctors rely on other clues to diagnose and treat the problem.

While excess snot and phlegm aren’t pleasant, you wouldn’t want to go without mucus.

“Mucus creates a layer of protection between the outside world and you. So it’s very, very important,” Lane says.

It’s not just important for people. It’s also the slime that allows a snail to move across the ground. It’s the slippery coating that protects fish against bacteria in the water. “It’s a really wonderful material,” Boucher says.

But maybe your mucus isn’t feeling so marvelous. If excess mucus is getting you down, see the Wise Choices box for tips on getting rid of it.

When There’s Too Much Mucus